Rescuers Search for Life After Deadly Quake in Southwest China 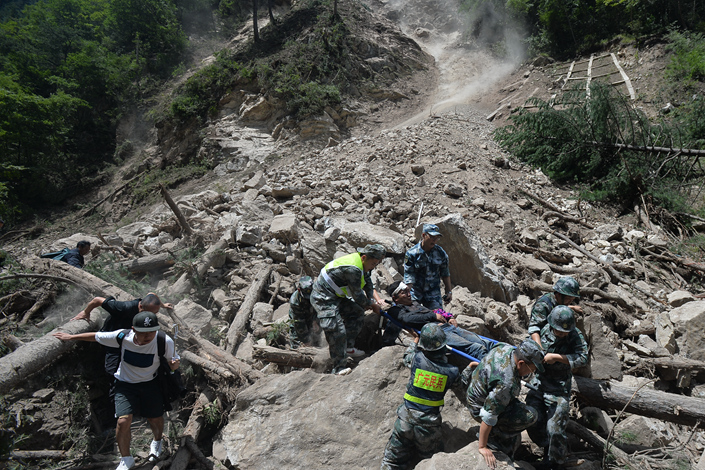 Rescue workers on Wednesday dug through rubble searching for life after a deadly magnitude 7 earthquake struck Jiuzhaigou county, the famed tourist town in the southwestern province of Sichuan.

At least 19 people were killed and 200 injured by the quake that struck at 9:19 p.m. Tuesday, the state-run People’s Daily reported. Cars and buses were crushed by boulders, stone homes were demolished and trees were snapped, video shot of the devastated areas showed.

“We suddenly heard a bang, like the sound of an explosion. I thought it was a missile attack,” a 53-year-old tourist, who was on a bus when falling rocks hit the vehicle and broke her legs, said in a video on miaopai.com. She described seeing another older woman die from wounds caused by rocks that crushed the bus.

The quake’s epicenter was in a mountainous area 35 kilometers (about 22 miles) from the center of Jiuzhaigou county and 290 kilometers from the provincial capital Chengdu, according to the China Earthquake Administration. The quake struck at a depth of 2 kilometers.

China sits on the junctions of several tectonic plates, or fault lines, including one along the Pacific Rim, making the country prone to seismic activity. At least five major deadly quakes were recorded in the past decade, including the one that struck Sichuan on May 12, 2008, which killed some 80,000 people.

In the town Zhangzha, one of the hardest hit areas in Jiuzhaigou, nine people were killed, the government of Aba prefecture said. Of those hurt in the quake, 28 suffered severe injuries, the earthquake authority said.

Jiuzhaigou, home to both a nature reserve and a national park, draws millions of tourists from home and abroad each year due to its breathtaking views, rich forestry, and clean air and water. Some 35,000 tourists were initially stranded in Zhangzha, the official Xinhua News Agency reported, citing the Sichuan government’s information office.

The government had said early on Wednesday that the tourists would be able to leave the town by that evening.

When the quake struck Tuesday night, Zheng Yu was trapped inside a valley area in Jiuzhaigou with a group of other tourists. She told Caixin that more than a dozen of her group were injured, including one who died after going into a coma and another who suffered a bone fracture.

She said temperatures dropped so low that they group lit a bonfire to stay warm as they waited for rescuers, terrified of moving for fear of falling rocks. Zheng and the others were rescued around 2:30 a.m. Wednesday, she said.

A major road connecting the Jiuhuang Airport and Zhangzha was inaccessible, according to the province government.

About 500 air travelers were stranded at the airport until 10 a.m. Wednesday, according to the state-run Sichuan Daily.

As a precaution, the Chengdu Railway Administration, which oversees train operations and railway lines in the country’s southwest, suspended 14 trains that run through areas affected by the quake, pending the inspection of tracks, an administration official told Caixin.

Over 20 aftershocks of at least magnitude 3 were recorded in Jiuzhaigou, according to the China Earthquake Networks Center.

Meanwhile, a magnitude 6.6 earthquake struck the remote Jinghe county in the northwestern part of the Xinjiang autonomous region at 7:27 a.m. Wednesday, injuring at least 32, according to the China News Service.