By Shen Fan and Li Sijia 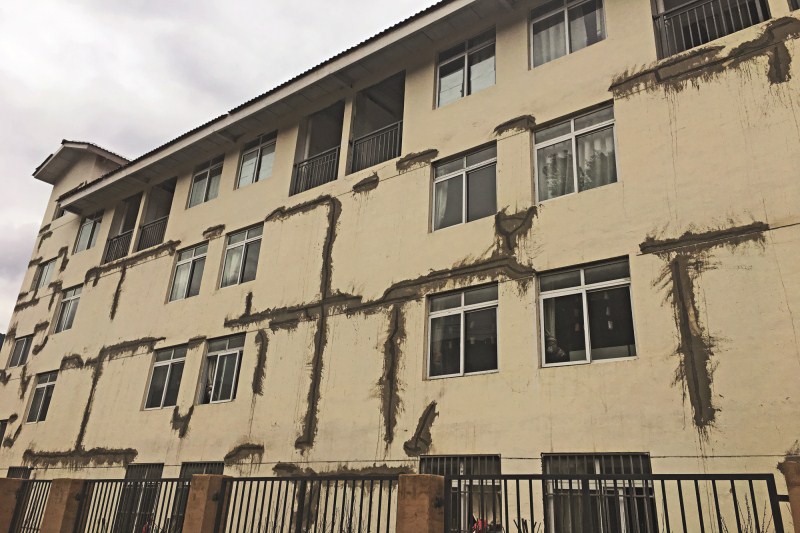 Many new concrete structures in Yunnan province, built after a Feb. 8 earthquake there, are already showing cracks. Local government officials insist the structures are structurally sound. Above, cracks in one kindergarten (preschool) built by Yunnan Construction Engineering Group are visible after the earthquake.Photo: Shenfan/Caixin

Chen Yong looks nervously at the large cracks in the walls of his new concrete house, which was plagued by leaks and cracks even before the construction was finished and he moved in late last year. After a 4.9 magnitude earthquake struck his home county of Ludian in Yunnan province on Feb. 8, the cracks spread and deepened.

The house is one of over 1,000 identical units built after a 6.5 magnitude earthquake rocked the region on Aug. 3, 2014, killing more than 600 people and damaging over 80,000 buildings. The buildings’ lack of earthquake resistance is believed to be the main reason for the loss of life. While Chen, 33, survived, his adobe house was completely destroyed.

Chen and his neighbors now worry that their new homes, subsidized and commissioned by the local government, will be just as vulnerable — a frightening prospect in the quake-prone region.

The government and the construction companies maintain that the quality issues are minor and fixable and have not affected the homes’ ability to withstand earthquakes. But to date, no third-party quality assessment of the buildings has been conducted.

Villagers believe rushed construction, subpar materials and unregulated subcontracting are to blame. Whether the issues are serious enough to threaten the structural safety of the homes is still unclear.

After the 2014 quake, residents were left living in temporary tents, and Chen’s local government in Ludian’s Longtoushan township was eager to get people into earthquake-resistant homes as quickly as possible.

Originally, the plan was to give subsidies to the Longtoushan villagers to rebuild the homes themselves. But it was difficult for the residents to find laborers, and the shipping of materials was slow. So in September 2015, the local government took back control of the project, and two provincial state-owned construction companies were hired through a tendering process to build just over 1,000 two- to three-story residential units. Each unit cost 200,000 yuan ($29,000), with the government subsidizing each one by 40,000 to 50,000 yuan.

Chen was forced to borrow money from friends and relatives and take on odd jobs to cover the costs of the new home. Looking at his house now, he sighs and says, “I spent all that money, and the house is falling apart.”

The two companies, Yunnan Construction Engineering Group Co. Ltd. (YCE), and the 14th Metallurgical Construction Corp. of China Nonferrous Metal Industry, were highly regarded in their field. The former ranked 298th on a 2016 list of the country’s top 500 companies and praised for its active involvement in relief efforts after the August earthquake. Both companies had won numerous national awards for their work and had completed countless large-scale projects both at home and abroad. Last April, the two companies, together with the Southwest Transportation Construction Group Co. Ltd., restructured and merged to form the Yunnan Construction Investment Holding Group Co. Ltd.

YCE was responsible for rebuilding 944 homes in Longtoushan, including Chen’s, as well as schools, hospitals and other public buildings in the township. Metallurgical Construction was responsible for 138 homes in the township’s old town area. When Caixin visited the area last month, fewer than 10 of the 138 families had moved into their new homes.

One woman surnamed Wang who had decided to move in was overwhelmed with the repairs the house needed. “Just look at the moldy pipes in my bathroom,” she complained to one of the construction workers. There was no electricity on the second floor of her father’s house, and the bathroom had leaks, she told Caixin. “It’s these types of problems that have prevented the other villagers from moving in,” she said.

Issues like leaky pipes are a nuisance, but the crux of their fears is earthquake safety, the residents said. Cracks or superficial repairs were visible on the walls of nearly all the homes Caixin visited and on the wall of a local kindergarten (preschool).

According to the rebuilding contract between the villagers and the Longtoushan government, the buildings met seismic precautionary standards for regions classified as Level VIII on the national seismic intensity scale, which measures earthquake intensity based partially on subjective factors like human perception and damage to buildings. According to these standards, Ludian’s seismic intensity is classified as Level VII, one degree less. The standards were tightened following the devastating Wenchuan earthquake in 2008 in bordering Sichuan province, where more than 69,000 people died and 4.8 million were left homeless.

While the scale also takes into account objective measures of horizontal motion on the ground, it isn’t clear to residents how strong an earthquake their homes can withstand.

“We are terrified,” one resident who declined to be named told Caixin. “If a relatively small earthquake could do this much damage, what will happen when a bigger one strikes?”

The visible defects aren’t the only thing stoking fears of quality issues in the township.

The construction proceeded at breakneck speed. According to a November 2015 report in the Yunnan Daily, work that was originally designed to be completed in six months got done in less than 100 days. Workers were on site 24 hours a day; at the height of construction, about 6,000 workers were on site, their makeshift barracks stretching an entire kilometer along the nearby Longquan River.

This didn’t leave enough time to ensure proper concrete solidification, according to some people involved in the construction. A concrete manufacturer in Ludian who declined to be named told Caixin that when some of the houses were built, the unhardened concrete should have been watered to ensure its proper solidification during the hot weather. The fact that time was tight and this step was overlooked could have affected the quality of some of the buildings.

Because the houses were built successively — some were started and finished before others — some houses whose construction began closer to the deadline were even more rushed, being built in about two months, according to a worker in charge of materials transport. In the rush, concrete templates that should have been left in for 15 days were sometimes removed after as little as two, he said.

Company representatives rejected these claims, saying no templates were removed within 10 days.

Another point of contention between the villagers and those constructing their homes is the issue of subcontracting, which villagers said led to the hiring of unvetted temporary workers. The construction companies vehemently deny that any illicit subcontracting occurred.

According to Longtoushan Mayor Li Changpu, some quality issues are inevitable after building so many homes in just three months. But he said that after repairs, which began almost immediately after the move-in date and are still ongoing, 80% of residents could accept the conditions. “Those who are still not satisfied have unreasonably high expectations,” he told Caixin.

Ma Ningjiang, an executive at Metallurgical Construction and former head of the rebuilding project, told Caixin that some villagers were even damaging their new homes deliberately and demanding compensation.

Li and the local government maintain that the quality issues are the responsibility of the construction companies. They said the pace of work has been slow, leading to frustration among villagers.

The companies reject the accusation that their repair work has been behind schedule and say the quality issues are within the scope of “common quality problems” allowed for under China’s Construction Law.

What the government and the construction companies do agree on is that the problems have not affected the buildings’ structural integrity or ability to withstand earthquakes. Li said experts from both YCE and the Zhaotong city government have evaluated the homes. Both evaluations concluded that there was no structural damage or impact on shock resistance.

But no independent evaluation has been conducted. According to local villagers, YCE and the local government had agreed to a third-party evaluation, but with the stipulation that if no significant issues were found, the villagers would have to pay the roughly 10,000-yuan-per-home appraisal fee themselves. Balking at the risk of the steep expense, the villagers abandoned the idea.

For now, Chen and his neighbors can only hope it won’t take another earthquake to confirm their fears.