Alibaba Teams Up With Hometown to Boost Rental Market 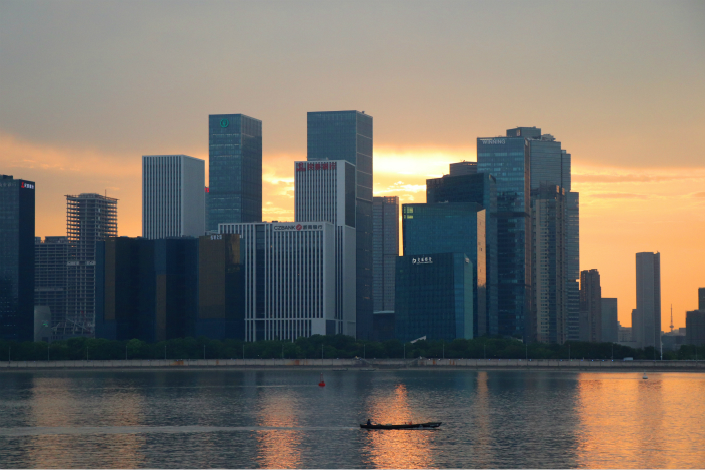 Hangzhou’s housing authority has joined up with Alibaba and Ant Financial to take on the many problems in the city’s home rental market, including phony information and tension between landlords and tenants. Above, buildings stand on the north shore of the Qiantang River in Hangzhou on July 14. Photo: IC

(Beijing) — The hometown of e-commerce giant Alibaba is tapping the company’s technology prowess to set up an official online property rental platform, as the central government encourages cities to offer more housing options to residents amid a shortage of affordable homes.

The housing security and management bureau in Hangzhou signed an agreement with Alibaba and Ant Financial, the online payment service provider backed by its billionaire founder Jack Ma, to use their information verification and credit-scoring technologies in service of the government, the two sides said in separate statements on Wednesday.

The project will “resolve the multiple prominent problems in the house rental market such as fake information, volatile relations between landlords and tenants, and irregular rental practices,” the bureau said in its statement.

Last year, the State Council, China’s cabinet, ordered local governments to develop the rental market, to help meet rising demand for housing in towns and cities and rein in surging property prices. In July, the government told local authorities in areas with net population inflows to provide more support for renting, including setting up government-backed rental platforms. Hangzhou was among 12 cities selected to roll out pilot programs.

Boosting the rental market is “a key measure to implement the policy that ‘homes are for living and not speculating on,’” the Ministry of Housing and Urban-Rural Development said in a joint statement with eight other central government bodies in mid-July, referring to comments made by President Xi Jinping in December. The agencies said the policy was also an important way to accelerate “new-style urbanization,” a plan announced in 2014 that emphasizes the need for a more people-centered and environmentally friendly development path for cities.

The so-called “intelligent home rental platform” to be built by the Hangzhou government and Alibaba, which is expected to come online by the end of next month, could be replicated and rolled out across the country with the support of the housing ministry and other agencies, the official Shanghai Securities News reported Thursday.

The platform will provide information about rental properties supplied by all parties such as the government, property developers, real estate agencies and individual home owners, according to the Hangzhou housing regulator’s statement.

Real-name identification, facial recognition and Alibaba’s verification technologies will be applied to ensure authentic information about the landlord, tenant, rental cost and ownership of the apartment so as to “improve the reliability and security” of the rental agreements, it said. Ant Financial will provide the online payment service for transactions on the platform.

The platform will also integrate government-controlled market information with Alibaba’s online user comment system and the credit-scoring resources of Zhima Credit, an Ant Financial subsidiary, to keep track of the credibility of landlords, tenants and letting agents. It may offer incentives such as zero deposits for renters with high credit scores, the housing bureau said.

“Rental housing endorsed through this credit system will not only reduce the financial burden (for tenants), but also avoid industry-specific problems such as illegal agencies, fake information and violation of contracts,” Hu Tao, president of Zhima Credit, formerly known as Sesame Credit, said in the statement issued by Alibaba and Ant Financial.