By Lin Zizhen in Dalian and Wu Gang in Beijing 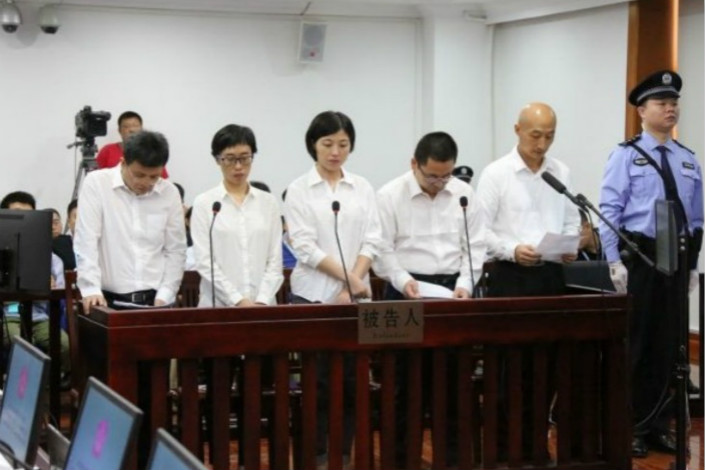 One ex-business partner and four former employees of fugitive tycoon Guo Wengui told a court on Friday that he was the mastermind behind a scheme and subsequent cover-up in which more than 400 million yuan ($60 million) was siphoned from a company, allegedly to pay off Guo’s debts and buy personal luxuries.

“My act instigated by Guo Wengui … has hurt the dignity of justice and constitutes the crime of embezzlement,’” Gao Song, a former vice president of Guo-controlled Beijing Zenith Holdings Co. Ltd., told the court.

Guo is being sought by the Chinese government for alleged bribery of public officials and other wrongdoing to build his fortune. He fled China in 2014 amid corruption investigations into his associates, which by the following year officially included Ma Jian, a former vice minister of state security. Guo is now considered a criminal suspect by the Chinese government. Once named among China’s richest people, Guo is now believed to be living in the U.S., where he is being sued by creditors, among others. Text and photos of the trial as it progressed were shown on the court’s official Weibo social media account.

The court proceeding on Friday was the latest of a series in China to open recently that involve companies owned by Guo, who is also known as Miles Kwok.

Gao pleaded guilty at the trial, held at the Dalian Xigang District People’s Court in northeast China, as did the other four Guo associates. But they claimed they had acted under the instructions of Guo, who allegedly wanted them to take 400 million yuan from Tianjin Huatai Holding Group Ltd. from 2008 through 2012 and make the transaction appear legitimate. The court will give its verdict and sentence of the five Guo associates at a later time.

Qu Long, then the president of Zhongyin Investment and Development Co. Ltd. and also the executive director of Guo’s Beijing Zenith at that time, told the court that he was only carrying out instructions from Guo, who took over Tianjin Huatai when its chairman was being investigated by police.

In the process of the takeover of Tianjin Huatai, “Guo Wengui and Zhao Yun’an would discuss the situation and reach a consensus, and I’m only a person at the execution layer,” Qu told the court.

Zhao, then the chairman of Tianjin Huatai, sought Guo’s help to get him out of police detention, leading to his company being seized by Guo and its assets stolen, Zhao alleged in his testimony.

Zhao said he tried to seek help from Guo in 2008 to get himself out of police detention after being arrested for a business conflict. In return, Zhao agreed to transfer to Guo the Beijing-based Heda Innovation Technology Co. Ltd., for 300 million yuan. Zhao controlled the company, which was the major shareholder of Tianjin Huatai.

But Guo never paid Zhao the money, even though Guo successfully took the 74% controlling stake of Tianjin Huatai in July 2008, with businessman Qu Long acting as his frontman, Zhao testified.

“We agreed earlier on the 300 million yuan, but Guo removed the amount of money when we drafted the agreement document. During the process, Guo threatened me not to think about the money anymore,” Zhao told the court.

Without holding any board meeting or shareholder meeting of Tianjin Huatai, Guo instructed Qu to transfer 428.7 million yuan from Tianjin Huatai to Qu’s Zhongyin Investment in the name of a cooperation agreement in August 2008, prosecutors said. Then Zhongyin Investment spent 400 million yuan to pay the debts of Guo’s Beijing Pangu and Beijing Zenith, and also for Guo to purchase luxury cars and pay off some of his personal debt, prosecutors said.

To make the transfer of 400 million-plus yuan from Tianjin Huatai seem legitimate on paper, Guo and Qu signed a series of documents in February 2009. They tried to make the money appear to have been willingly paid by Tianjin Huatai, later known as Yuanrun Holding Group, to Guo’s company Henan Yuda Real Estate Co. to purchase an office building.

The three employees faked agreements and memorandums during the process, the prosecutors said. As Zhengzhou Haohang was not able to repay the debt, Guo secured the money that originally came from Tianjin Huatai. The three were charged with embezzlement for willingly helping Guo seize the money, prosecutors said. The crime is punishable by up to 10 years, according to the People’s Supreme Court’s interpretation in 2016.

Qu was detained in March 2011 shortly after he wrote a letter to the top anti-graft body, the Communist Party’s Central Commission for Discipline Inspection, and reported Guo’s alleged partnership with then-State Security Vice Minister Ma and other officials to secure business deals.

Qu was sentenced to 15 years in 2012 by a court in Hebei province for embezzlement of 855 million yuan in a separate case. He has been in prison since then, and the Dalian prosecutors said the new trial should result in additional prison time for offenses that he wasn’t tried for in 2012.