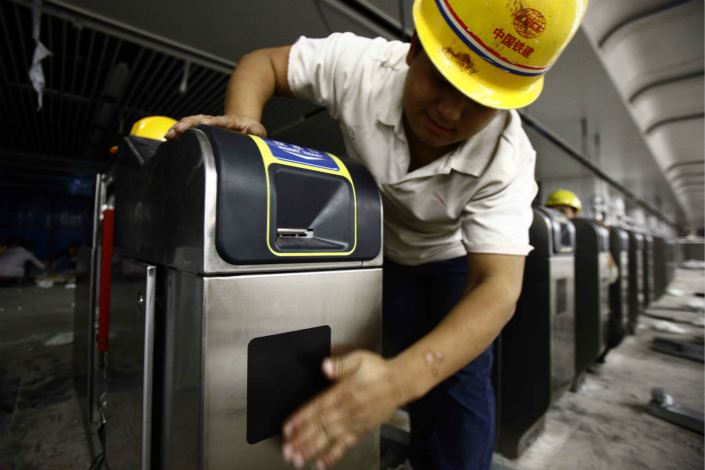 Beijing municipal authorities have rolled out promotions for a new program that allows subway riders that use certain Android cellphones to pay fares with their phones at all of the city's subway stations. Above, workers install fare gates in a Beijing subway station in October 2011. Photo: Visual China

Beijing’s 274 subways stations let you pay with nothing more than your smartphone — as long as it’s not an iPhone, which currently doesn’t support the technology.

On Monday, authorities began rolling out citywide promotions for the wireless function, which allows direct payment from 160 smartphone models, including those from Huawei Technologies Co. Ltd., Xiaomi Inc. and Samsung.

The city’s transit system has featured such technology since 2013, but only a few thousand people — a fraction of the number of passengers who ride the metro every day — use the service daily.

Commuters simply hold their phones to the terminals where they usually swipe prepaid cards. No internet connection is required, according to the Beijing Municipal Administration and Communication Card Co. Ltd. (BMAC), which manages the city’s public transportation cards.

But the service is unavailable for iPhone users because Apple doesn’t currently allow the required near-field communication (NFC) technology on its handsets to connect to third-party payment terminals in China, BMAC said.

NFC allows two devices to connect and activate in-phone functions, such as payments.

An upgrade to Apple’s iOS operating system due this fall will enable the latest iPhone 7 and 7 Plus models to read more third-party NFC devices, according to company information released at the Apple Worldwide Developers Conference (WWDC) in June.

A BMAC employee told Caixin that the state-run company doesn’t know for now whether the iOS upgrade will be compatible with the city’s payment terminals.

One reason for the feature’s low popularity is that it requires cellphones to have a special SIM card with embedded NFC technology. Since last year, more phone-makers have been adding NFC components to their handsets.

In June, Beijing launched a pilot promotion on the southwestern Fangshan Line, and the one-month campaign helped triple daily mobile transactions to 200,000, the BMAC said in a statement.

Beijing has now expanded the promotion to all 15 lines, placing instructional brochures at all stations across the city, hoping to boost the daily mobile transaction rate of 2%.

Most newer phones — including the Xiaomi 5S, Huawei P10 and Samsung Galaxy S8 Plus — now have an embedded NFC module, meaning users no longer need to purchase NFC-equipped SIM cards. There are a few models that still require such cards, however, the BMAC said.