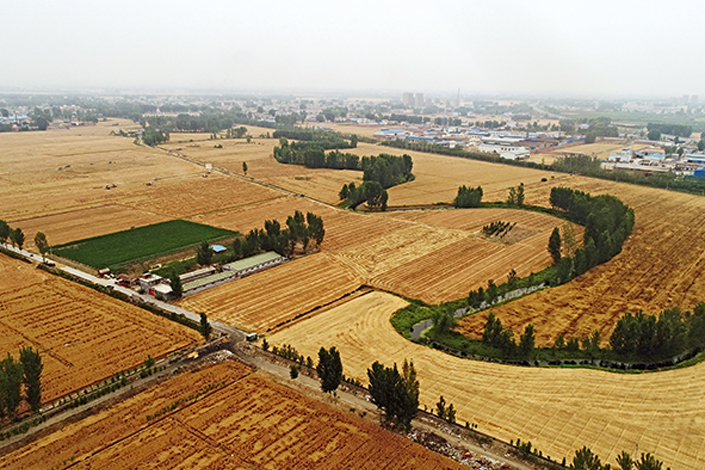 Wheat fields are seen in Fengquan district of Xinxiang, Henan province, in June. Many industrial businesses, including copper smelters, chemical plants, and battery manufacturers, are near this 300-mu (49.4-acre) field, where environmental-protection volunteers collected seven wheat samples. Test results from a lab in the province showed that all wheat samples had excessive levels of cadmium. Photo: Chen Liang/Caixin

(Xinxiang, Henan province) — Red dust coated the battery factory floor, and red haze colored everything Li Mingjian cast his eyes on after a long day on the job.

Li, 38, was hired in 2000 by Henan Huanyu Power Source Co. to assemble steel-case storage batteries using cadmium oxide electrodes and sponged cadmium. He did so with his bare hands even though the reddish cadmium oxide was poisonous.

“After a day of work, my eyes were sore and everything I saw was red,” Li recently told Caixin.

Although he didn’t know it at the time, Li and hundreds of other workers at the state-owned factory in the city of Xinxiang, in Central China’s Henan province, were slowly being poisoned by cadmium, a toxic heavy metal.

The battery plant went into bankruptcy last year amid a government push that closed hundreds of Xinxiang battery-makers — part of a citywide crackdown on industrial pollution that began in 2012.

Exposure to hazardous materials in the nickel-cadmium battery-making process has taken a toll on Li and his former colleagues. Moreover, according to environmental experts, chemical waste released by the factories has made its way into waterways and onto farmland, tainting wheat fields and threatening the public.

Li was diagnosed with cadmium poisoning about 12 years ago during a checkup at Xinxiang’s research institute for occupational health. Many co-workers had also fallen ill.

The institute “was at one time packed with hundreds of workers” who were suffering from various ailments after working at battery factories, Li said. They all wanted “to be treated for cadmium poisoning.”

The company responded to Li’s condition by transferring him away from the assembly area to a unit where workers packed finished battery products. But the damage to his health was already done.

Now, every year, Li spends about three months in a hospital to receive urinary tract treatment because cadmium oxide has permanently damaged his kidneys.

Doctors can’t cure former battery-plant workers like Li. Rather, they use in-hospital treatment sessions to boost immune systems in hopes of preventing infection and illness, according to Guo Fuzhi, 50, another ailing factory worker, quoting his doctors.

“The pain in my waist and legs is so severe that sometimes I can barely walk,” Li said.

Guo, who was also diagnosed with cadmium poisoning, had a cancerous right kidney removed several years ago. No longer able to work, he lived on a company payout of 600 yuan ($90) a month until last year, when the company became insolvent.

Residents of the urban sections of Xinxiang on average earn about 2,241 yuan a month, according to the city’s Bureau of Statistics.

Guo, who is left in limbo, said he and other workers with health problems have petitioned the local government on many occasions in hopes of receiving higher levels of compensation, but to no avail.

He told Caixin that they are think of pursuing a lawsuit against his former employer because the company did not purchase required insurance to cover the occupational health claims, but are fearful of getting nothing if their attempt at filing a lawsuit is unsuccessful.

Chinese courts have the power to refuse to hear lawsuits. They’ve been known to do so if the potential defendant is a government agency or state-owned firm.

City government officials did not respond to Caixin requests for comment.

Fast-paced and sometimes reckless economic development in recent decades has been linked to worker health problems across the country. Former battery-plant workers in Xinxiang are a case in point.

The Xinxiang area has nearly 200,000 acres of wheat fields. And the city, which boasts about 6 million people, had for decades served as a hub for battery manufacturing, with hundreds of battery plants and suppliers.

Some battery manufacturers outsourced their work to small, often unlicensed suppliers that disobeyed environmental protection rules, according to Li Zhi, who recently retired after working for a battery-plant supplier.

“In Xinxiang’s heyday, there were more than 140 small manufacturers in my area processing cadmium slabs to make cadmium oxide and sponged cadmium,” he said.

The environment has suffered in Xinxiang and other factory communities nationwide. A survey conducted by the Ministry of Environmental Protection and the Ministry of Land Resources three years ago found more than 16% of the soil samples collected nationwide containe unacceptable levels of pollutants, including cadmium.

Nearly one-fifth of the 133 million hectares (328.7 million acres) of farmland nationwide was contaminated and unsuitable for growing food for human consumption, the survey discovered.

An undisclosed quantity of cadmium-laced rice was discovered on store shelves in the southern province of Guangdong in 2013. More than half of it came from Hunan province, which has chemical manufacturing hubs.

Exposure to low levels of cadmium can lead to kidney stones or even kidney failure, according to the World Health Organization. It can also weaken bones and damage the respiratory system. Cadmium ingestion can cause cancer.

Air pollution is another byproduct of the battery boom. Cadmium oxide dust used to spew from the chimneys of small factories like red smoke, Li said.

Another issue is water contamination. Li said up to 40 tons of water is needed to produce 1 ton of sponged cadmium, so many small cadmium processors located their workshops near the Mingshengqu River, drainage ditches and streams. Untreated wastewater from the plants was dumped into the waterways, he said.

In 2015, the provincial government labeled Mingshengqu as one of the region’s most polluted rivers.

Volunteers from Airman, an environmental protection advocacy group based in Beijing, visited the Xinxiang area in June after receiving a tip that dozens of acres of wheat had been planted in a field between two polluted waterways in a local village, according to Tian Jing, a project manager with the non-governmental organization.

Soil samples collected from the wheat field were analyzed at a laboratory and found to have excessive levels of cadmium.

Soil samples taken from spots 4 meters (yards) from the trench on the right side of a field in Kuaicunying village contained 20.2 micrograms of cadmium per kilogram. That is 33.7 times the level allowed under the 1995 National Environmental Quality Standard for soil that can be used to grow crops including vegetables, tea and fruit, and for cattle pasture.

Samples from spots along the wastewater just 100 meters away contained 12.4 micrograms of cadmium, or 20 times the concentration allowed under the national standard, Tian said.

It’s not clear whether the contamination was linked to wastewater that farmers used for irrigation, or wastewater from factories in an industrial park nearby, the NGO said. But an environmental official familiar with that section of Xinxiang claimed livestock farms contributed to the water pollution.

Moreover, wheat grown in the Xinxiang area has also been contaminated, according to the environmental group.

A lab found 12 wheat samples collected by the NGO in May and June were laced with up to 10 times the amount of cadmium allowed under national standards for grain products.

Among the seven wheat samples taken from the cadmium-contaminated soil in Kuaicunying, all tested well above the level of 0.1 microgram of cadmium that’s allowed in grain and processed grain products under China’s National Standard for Food Safety.

Local authorities said they have restricted use of the contaminated field. Wheat can be grown for industrial uses only, while some tainted fields can be used for tree and shrub plantations only.

The Ministry of Environmental Protection in Beijing said in June it would run independent tests to determine whether cadmium had contaminated wheat in Xinxiang. So far, no findings have been announced.

In the village of Chenbao, fields near shuttered Huanyu factories are being used to grow wheat. Wheat farmers interviewed by Caixin said they will sell their crops to state granaries.

Cadmium-laced grain products will indeed affect public health, according to Shang Qi, a professor at the Chinese Center for Disease Control and Prevention’s National Institute of Environmental Health.

But the likelihood of sickening people is low because modern diets include a variety of food, he said, adding that “we are far from knowing for sure about the harm from cadmium exposure to public health due to the limits of our medical technology.”

But Shang said China “can’t afford to wait to tackle cadmium contamination. If we wait until the day we will know for sure, we may find that it’s too late.”

Meanwhile, Li recalled working in the battery factory with bare hands and primitive face masks. He was not taught told about the hazards of cadmium.

“I wish I had known about the chemical earlier,” he said. “If I had, I wouldn’t be living like this now.”