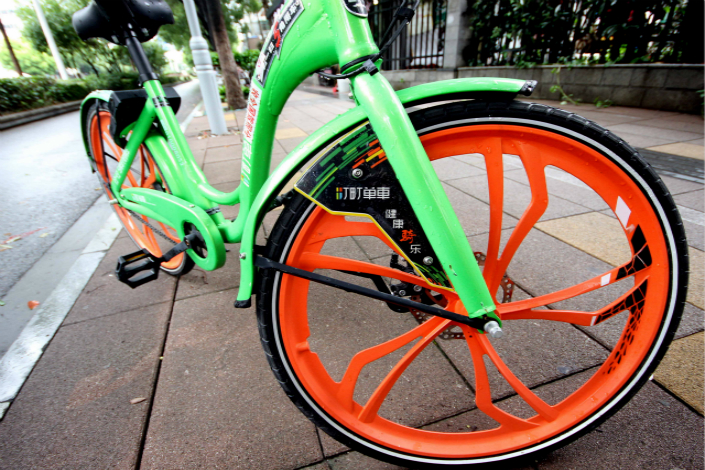 Nanjing-based bike-sharing company Dingding is no longer operating, and users' requests for refunds of their respective 199-yuan deposits have been ignored. Photo: Visual China

The cheery bicycle bells of local bike-sharing firm Dingding have fallen silent, the latest firm in China’s young but rapidly expanding industry to call it quits.

Unlike previous flops — with companies publicly announcing their withdrawal from the cash-burning sector — the Nanjing-based company has discreetly pedaled off with users’ deposits.

Nanjing’s Market and Quality Supervision Committee has received hundreds of user complaints saying users have been unable to retrieve their 199-yuan ($29.84) Dingding deposits, which were required to rent bicycles.

The government office also says the company — which was incorporated in November, near the beginning of China’s bike-sharing hype — is no longer operating at its registered address. Dingding has been listed as a firm whose “operations are not normal,” the committee told Caixin.

A user who preferred not to be mentioned by name said she requested her deposit be returned in June, but has yet to receive a response. She is part of a 300-member online consumer-rights group dedicated to obtaining their Dingding deposits.

The total number of users who have failed to receive their deposit is unclear.

Calls from Caixin to Dingding’s customer hotline have gone unanswered, and the company’s website — as indicated on China’s national company registry — failed to load. The operator of the 5,000 green and yellow bikes also ceased updating its social media accounts in April.

Beginning in March, exasperated users who decided to give up on Dingding bikes discovered that requests to retrieve their deposits were being ignored, and they began resorting to leaving angry messages below Dingding’s Weibo posts in protest.

“Why hasn’t my refund landed in my account? It’s been two days — are you guys con men?” one user by the alias of “Kudo Shi-ichi’s Girlfriend” remarked below a Dingding post in March.

Not all companies have been as lucky as industry leaders Ofo Inc. and Beijing Mobike Technology Co., which have crowded China’s sidewalks with tens of thousands of bikes and scooping up billions of dollars of investment.

Over 120 bike-sharing firms have entered the sector since September, when massive funding rounds sparked a venture-capital craze, according to Caixin calculations. Besides Dingding, at least two other bike-sharing firms — Wu Kong Bike and 3V Bike — have bowed out after short lives, citing high theft rates and insufficient funds to keep up with industry expansion.

Amid the explosive growth, 10 ministries — including the People’s Bank of China, the country’s central bank — recently rolled out a set of guidelines to govern bike-sharing firms as they go through boom-and-bust cycles, emphasizing the importance of third-party supervision over users’ deposits of hundreds of millions of yuan.