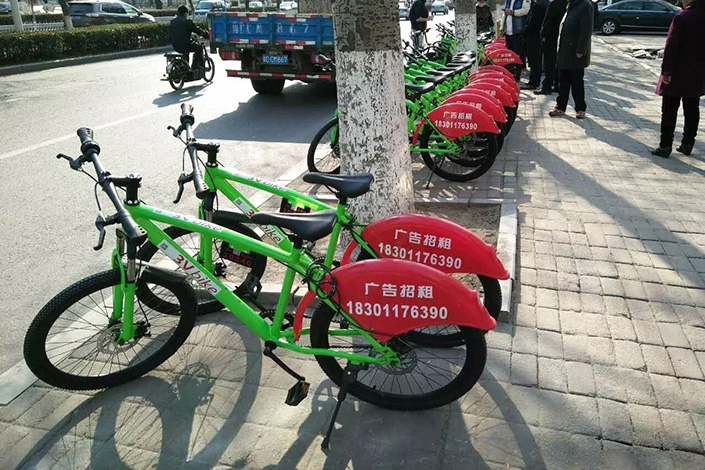 Four-month-old shared-bike service 3Vbike is going out of business, as the company cites a large number of stolen two-wheelers. Photo: 3Vbike

(Beijing) — Bike-sharing firm 3Vbike said it has ceased operations just four months after pedaling out of the gate, becoming the latest victim in a sector whose explosive growth looks set for an equally rapid crash.

The company cited a large number of stolen bikes behind its decision to close, according to its official account on the popular WeChat instant messaging service. The closure marked at least the second such recent case, coming just eight days after its rival Wukong Bike shut down for similar reasons.

Such boom-bust cycles are typical for China, where companies flush with investor cash often pile into the latest hot trends in hopes of finding riches, only to crash when those sectors become overheated. Similar patterns over the last five years have seen rapid rises of sectors like smartphones and internet-based take-out dining services, only to be followed by equally rapid crashes.

3Vbike founder Wu Shenghua, after sending out more than 100 business proposals, failed to raise any funds to keep his business going. He told The Beijing News that he spent about 600,000 yuan ($89,000) of his own money launching 1,000 bikes in four small cities — Baoding, Langfang and Qinhuangdao, in Hebei province, and Putian, in Fujian province.

But now only dozens of his company’s bikes can be found, while the majority of the two-wheelers have been stolen or hidden by users, he added.

Industry leaders Beijing Mobike Technology Co. and Ofo Inc. launched the sector a year ago, offering a newer form of service with more flexibility over older municipal services using specialized racks. Today, about two dozen smaller competitors across the country provide similar two-wheelers that allow users who have paid a deposit to unlock a bike via a smartphone app and park the vehicle essentially anywhere on a sidewalk or public space.

But such open-parking policies have made it difficult for smaller operators to manage so many scattered bicycles. Big brands like Mobike have equipped their vehicles with costly digital locks that include route-tracking and locating functions. But neither 3Vbike nor Wukong could afford such devices.

Damage and theft of bikes has become a common problem for the young sector, said e-commerce analyst Li Chengdong, who estimated that at least 20% of Ofo’s bikes disappear or are damaged every month. The companies haven’t released any statistics on the rates of theft and damage.

All the companies are competing for market share, burning huge amounts of money to offer better services and larger discounts, said Wu Dong, a professor at the School of Management at Zhejiang University.

Big names have stronger financial foundations to keep the operations going. Mobike has secured at least $1 billion in funding from the likes of Tencent and Bertelsmann, while Ofo enjoys a comparable capital pool. Mobike is also reportedly in talks to buy a smaller rival, UniBike, to expand its presence in the coastal city of Xiamen.