Mobike Fills Its Baskets With $600 Million in Latest Fundraising Push 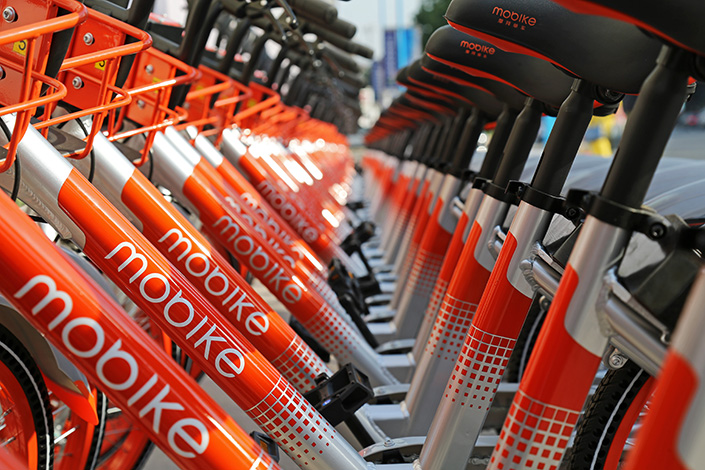 Mobike has announced $600 million in new funding as it prepares for the next stage of an intense bike-sharing battle in China and cities beyond. Photo: IC

(Beijing) — Mobike has pedaled off with a new $600 million to line its war chest in preparation for the next stage of an intense bike-sharing battle in China and cities beyond.

Its dizzying pace of financing makes the firm — whose orange and silver bikes put side-to-side would line a sidewalk the length of Taiwan’s coastline — one of the most efficient companies in luring private capital.

Fueled with billions of yuan in venture capital, bike-sharing firms have been racing to gain strongholds in China’s cities, often trying to outdo their rivals through sheer numbers, leaving cities struggling to keep up with the pace of their expansion.

Two years after Beijing Mobike Technology Co. obtained its first 1.5 million yuan ($220,000) in funds from angel investors. it recently raised $600 million from Tencent and state-backed BOCOM International, ICBC International Holdings and others. The money will help pay for its expansion into cities outside of China, as well as for research and development.

Mobike has set sights on duplicating its bike-rental business to markets overseas, where there is little competition. It has begun placing bikes in Singapore, and this week announced plans to start services in Manchester, England.

Officials in San Francisco, considered one of the most bike-friendly cities in the U.S., said in January they were drafting laws to prevent the unpermitted use of the “public realm as a distribution platform for private bike-share corporations.”

Mobike’s new $600 million will also bolster its use of internet of things and artificial intelligence to “increase the technological barrier and widen the company’s edge over competing firms,” according to a statement announcing the funding round on Friday.