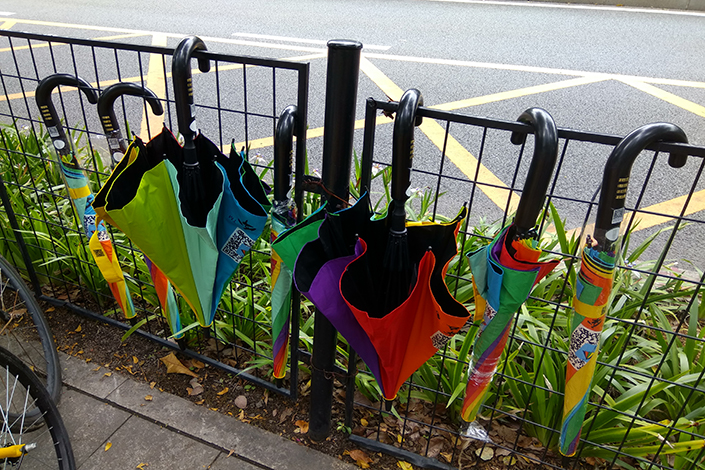 Shared umbrellas hang in front of an office building in Shenzhen, Guangdong province, China, on May 19. Umbrella-share services have popped up in China in recent months. Photo: IC

(Beijing) – Venture cash is rushing into China’s nascent but diverse sharing economy, providing tens of millions of yuan in recent months for startups focused on shared bikes, power banks, basketballs and even umbrellas.

Umbrella-sharing app E-umbrella became one of the latest favorites of venture financiers after raising 10 million yuan ($1.5 million) this week, just a week after its first batch of 30,000 rain-protection products hit the streets in Shenzhen, a southern Chinese city where downpours are common from May to September.

The company's rainbow-colored umbrellas can be found hanging from roadside fences. Each has a coded lock that, whenever it starts to rain, can be opened with a swipe of a QR code by passersby with smartphones. Customers pay a 19 yuan deposit and 0.5 yuan per half-hour of use.

The startup plans to roll out some 30 million umbrellas both at home and abroad this year.

E-umbrella isn’t the only company capitalizing on umbrella demand. Another, called Chunsun, which translates as “springtime bamboo shoots," secured 5 million yuan in late May with the goal of launching its business in June.

The nation's first umbrella startup, Molisan, rolled out 1,000 umbrellas in March in the city of Guangzhou, near Shenzhen. Unlike its competitors, Molisan uses cabinets to store streetside umbrellas between rains.

The umbrella trend mirrors the shared-bike wave that sprouted when Mobike's rentable bicycle wheels started spinning in Shanghai in April 2016. Today, the company is one of several riding the wave in each of China's first- and second-tier cities.

These young business-models have endured growing pains, worrying entrepreneurs and urban regulators. Unruly shared bike riders, for example, have been faulted for violating traffic rules, parking in forbidden areas and stealing units by breaking bike locks. Governments in cities such as Beijing, Shanghai and Tianjin have started to more closely regulate the rent-a-bike industry.

Startups tapping consumer demand for umbrellas have also drawn concern, particularly since stealing them could be relatively easy.

But a Molisan representative said that among all the umbrellas his company had set out through March, only eight were not returned. The representative, surnamed Chen, told Caixin that to discourage theft, the company may adjust the deposit rate, which is now up to 30 yuan – an amount roughly equal to the cost of a typical umbrella.

Another possible challenge is low profitability. Most sharing economy startups have been relying on investments rather than revenues. Some are not even sure whether with rental charges they can make ends meet over the long term, said Deng Sha, an analyst at the Shenzhen-based Forward Industries Institute.

Nevertheless, startup entrepreneurs have found that the sharing economy can support a variety of goods, including cars, portable chargers and basketballs. Some have even found a way to share office work-spaces.

U.S. coworking space giant WeWork is benefiting from the wave, to the delight of the company's APAC Managing Director Ole Ruch.

"I'm very impressed by China's sharing economy development," Ruch told Caixin. "I’ve never seen such a dynamic market where you can share everything from bikes to power banks, spaces, cars..."

WeWork, which expanded into China last year and now operates six divisions in Beijing and Shanghai, is standing up to fierce competition from companies such as Naked Hub, which was founded by expats in Shanghai, and a company called URWork, which recently merged with Hongtai New Space and in late May announced the raising of nearly 400 million yuan ($58 million).

Another niche focusing on small but popular items involves portable power banks that are stored in special "cube" cabinets when not rented by a customer.

Venture capital firms have fueled the shared-power bank industry, with the company Imlaidian receiving $20 million in April and Xiaodian securing more than 350 million yuan. These start-ups so far have received around 1.2 billion yuan from 35 institutions, Deng said.

And shared basketballs have started bouncing around outdoor courts. The balls are stored in locked cabinets and retrieved by anyone paying a deposit who also agrees to an hourly charge. Startup Zhulegeqiu in early May announced more than 10 million yuan in funding so that it can expand its basketball business to 23 cities in the future.

CECRC in a recent report estimated that China's sharing economy was worth nearly 4 trillion yuan last year, up 76% from 2015. Transactions in the fast-growing sector will account for more than 10% of the nation's GDP by 2020, according to CECRC.

Some consumers are looking for even more – and more unusual – sharing opportunities.