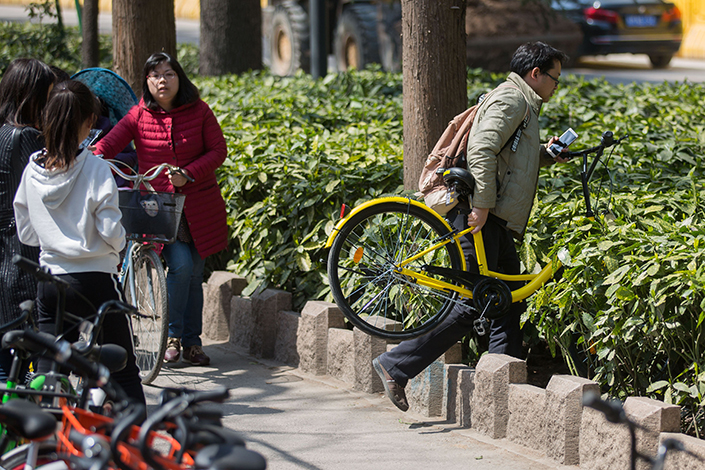 Nanjing is pushing back against the flood of often-unruly shared-bike riders who have taken over its streets, as the city toughens punishments for traffic violators and works with rental companies to track down offenders who flee police.

Nanjing is believed to be the first city in China to levy such heavy punishments for rule-defying cyclists, according to the official Xinhua News Agency.

Authorities in Jiangsu’s provincial capital said they are collaborating with eight bike-sharing companies to crack down on cyclists who are caught running traffic lights or riding in the wrong direction or in car lanes.

The problem sprung up as quickly as the industry itself, with bike-sharing companies in China dumping millions of two-wheelers onto the roads of major cities such as Beijing, Shanghai and Shenzhen as they attract billions of yuan in investments from venture capitalists.

According to Nanjing’s Yangtze Evening News, the companies have placed on the city’s roads 285,000 bikes, including those of leading brands Mobike, Ofo and Bluegogo.

The bikes do not dock into fixed stations, but are simply parked along sidewalks and alleyways. A bike is available to riders after a quick scan with a cellphone of the bike’s QR code.

Penalizing traffic violators on the bikes has been difficult because riders don’t care if police confiscate the bikes, which don’t belong to the offenders anyway. According to China’s Road Traffic Safety Law, police can confiscate non-motor vehicles if drivers refuse to pay fines for traffic violations. But with rentals, riders often refuse to pay and simply leave the bike with the officer.

But city authorities now say that violators could be permanently barred from using the bikes if they are caught multiple times or found breaking serious rules, according to local media reports.

On Monday, Nanjing police publicized an initial blacklist of 20 violators, including part of their names, their infraction, the time and location where they were caught, and the brand of their rental bike.

Nanjing traffic police dealt with more than 65,000 traffic violations involving non-motor vehicles in April, confiscating 2,234 such vehicles, including 330 rental bikes. Police said they have confiscated 771 rental bikes since the beginning of this year.

By working with the bike-sharing companies, police can track down information on the last rider of a confiscated bike and make it difficult for the cyclist to use other bikes again.

Rental companies are also instituting a credit-rating system for riders. With Mobike, for example, every user who registers gets 100 points of initial credit. The rating will grow as long as users obey traffic regulations and Mobike’s rules for parking the bikes.

But if a user is found leaving the bike and running away from police, 50 points will be deducted. When the credit falls below 80 points, the user will have to pay 100 yuan for each ride under half an hour, as compared to normal rate of 1 yuan per half hour.

If the credit falls to zero, the account will be permanently shut down, police said.

Several Chinese cities have devised rules to manage the clutter of shared bikes on sidewalks or at subway entrances. Tianjin, for example, is drafting an ordinance that requires companies to employ at least 50 offline service personnel for every 10,000 of the companies’ vehicles on the streets. Beijing and Shanghai are limiting the number of bikes allowed to be placed in certain districts.