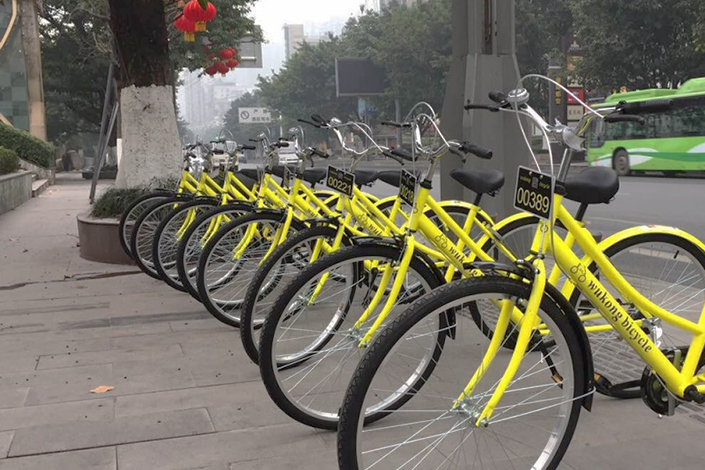 Chongqing-based Wukong Bikes has shuttered after losing most of its 1,200 cycles, which didn't have GPS devices. Photo: Wukong Bikes

Wukong Bike lasted a mere six months. In one of China’s most storied legends, Journey to the West, Sun Wukong, the Monkey King and the inspiration for the company’s name, had innumerable lives.

Wukong announced its shuttering last week, citing a “strategic company restructuring.” The announcement took place just two days before Mobike, one of the industry’s two leaders, announced on Friday it had secured $600 million — unprecedented in the sector — in its latest fundraising.

A year ago, Beijing Mobike Technology Co. and its major rival, Ofo Inc., launched the first batch of shared bikes in Shanghai. Today, about two dozen smaller competitors across the country provide similar two-wheelers that allow users, after paying a deposit, to unlock a bike via a smartphone app and park the two-wheeler essentially anywhere on a sidewalk or public space. The service costs around 0.5 yuan (7.3 U.S. cents) to 1 yuan per hour and is often discounted or free as companies attempt to lure users.

Wukong operated its 1,200 bikes in the southwestern city of Chongqing. But most of the bikes were lost because the firm didn’t embed GPS devices in the vehicles. By the time the company decided the devices were necessary, it had run out of money and failed to raise more, Wukong founder Lei Houyi said in an interview with online publication The Founder.

Another reason for Wukong’s closure is that Chongqing is built on hills, which isn’t conducive for cycling, said Wu Dong, a professor at the School of Management at Zhejiang University who studies innovation, startups and business strategy.

Lei argued that launching shared bikes in such a hilly city would make headlines. He previously ran a mini-loan business in Chongqing targeting the consumer market — which also shut down due to lack of investment.

For an emerging industry, companies compete for market share, battling for a user base, and in the end burning money to offer better services and larger discounts, said Zhejiang University’s Wu.

Mobike and Ofo often make “ride for free” periods — frequently on the same day — and are generous on giving out small cash transfers and coupons. Mobike is backed by at least $1 billion in investments, including from Tencent and Bertelsmann, while Ofo enjoys a comparable capital pool, with investments from Ant Financial Group, Coatue Management, and others.

Wukong began by charging users, but later made all rides free, and ended up with 3 million yuan in losses, Lei said.

The price war has parallels to the car-hailing industry, which saw fierce initial competition but is now dominated by Didi Chuxing, which swallowed its rivals Kuaidi and Uber China.

Similarly, the bike-sharing industry will eventually head toward a monopoly, Wu said.

For now, the industry is facing other challenges. Bikes are often damaged or stolen, and some riders don’t park them properly. Regulators have grown concerned with the large deposits that startups collect, which may not be refunded in the case of business closure and which some companies have invested into financial markets.

“The startup is closed now,” Lei said. “I’ll think of it as a charity project.”