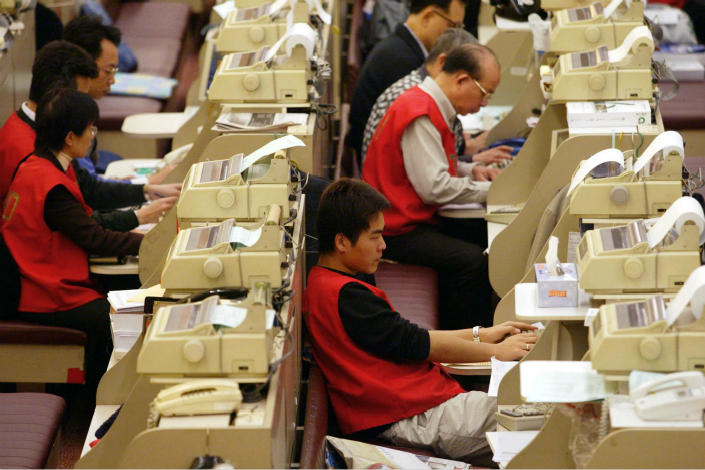 After October, the Hong Kong Stock Exchange’s 45,000-square-foot trading hall, set to be renovated into a “financial showcase,” will no longer be home to a host of red-jacketed brokers. Photo: Visual China

(Hong Kong) — Brokers at the Hong Kong Stock Exchange trading hall will hang up their iconic red jackets for the last time in late October.

As most securities trading has become electronic, the operator of the Hong Kong Stock Exchange has decided to close its iconic trading hall which has been underutilized in recent years.

From the end of October, no more brokers — who are all required to wear red jackets — will work in the 45,000-square-foot trading hall that houses Asia’s third-largest stock exchange by turnover, a spokesperson from Hong Kong Exchanges & Clearing Ltd. (HKEx) said.

The trading hall, which opened in 1986 and became a symbol of Hong Kong’s rise as Asia’s premier financial center, will be renovated into a “financial showcase,” the spokesperson said.

During its heyday in the 1990s, as many as 900 authorized brokers ran frenetically around the trading hall each day, shouting out prices, according to the local newspaper The Standard.

The number of desks in use dropped to 294 after the hall completed its first major renovation in 2006. Now, brokers lease only 62 desks for HK$7,000 ($895) a month each, though only 30 brokers show up to the trading hall in Exchange Square on average each day, the spokesperson added.

In the early years of the stock exchange, each transaction had to be manually recorded on a whiteboard. Brokers in the hall communicated using the loud “open outcry” that has become Hollywood shorthand for stock trading.

The bourse’s trading system was computer-assisted from the outset, but brokers still needed to walk around the trading floor to complete transactions and issue transaction records. Even after the stock exchange introduced its Automatic Order Matching and Execution System in 1993, brokers still had to be in the trading hall to enter orders into the system, according to a HKEx publication from 2005.

“There were a few times when traders were in such a rush to complete transactions and ran so quickly in the trading hall that they injured themselves, and we had to call for ambulances,” Ho Tze-kwan, former assistant vice president of business development at HKEx’s Cash Market Department, recalled of the hall’s busier days.

In 2000, electronic displays were added to the hall.

Now, most trading is conducted electronically from brokers’ offices. After October, the hall will be converted into a space for promoting the bourse, the spokesperson said. The new venue will be used for ceremonies, exhibitions, conferences and investor education events.

The Hong Kong bourse is the latest of many stock exchanges to shutter their trading floors in the past few decades.

The NYSE MKT, formerly known as the American Stock Exchange, closed its hall in January after more than a century. The exchange is now fully electronic. In July 2015, the Chicago Mercantile Exchange closed many of its once-hectic futures trading pits, saying that open outcry trading had fallen to 1% of all trades.

The Tokyo Stock Exchange and the Singapore Exchange have also made the transition to all-electronic trading.

The HKEx spokesperson said the bourse was evaluating brokers’ needs and considering relocating trading desks to nearby offices in Hong Kong’s Central district once leases expire in October.