Stocks in Hong Kong, Mainland Connect Program More Than Double in First Half 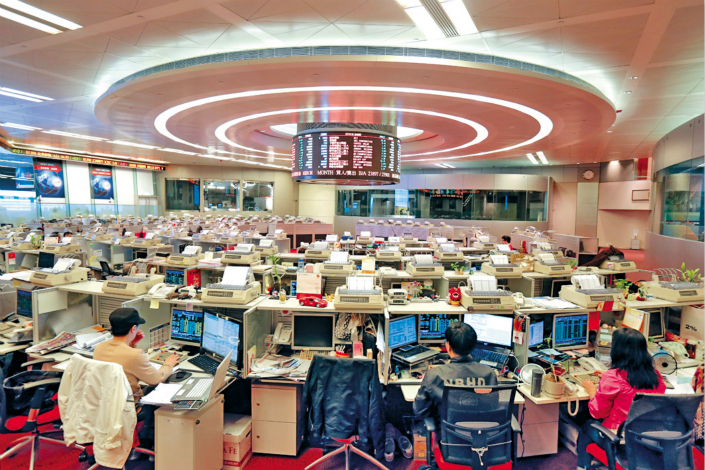 As of the end of June, the total value of Hong Kong-traded stocks held by investors in Shanghai and Shenzhen under the Stock Connect program reached $594 billion, up sharply from $211 billion a year ago. Above, the trading floor of the Hong Kong Stock Exchange is seen this month. Photo: IC

Stock-trading among the exchanges in Hong Kong, Shanghai and Shenzhen under a mutual-access program more than doubled in the first half of this year from a year ago, but still contribute less than 3% of revenues to the operator of the Hong Kong bourse.

As another trading link designated for bonds kicked off in early July, the city’s bourse said its position as a fixed-income hub for Asia will likely be strengthened, adding to its core strength of equity trading.

As of the end of June, the total value of Hong Kong-traded stocks held by investors in Shanghai and Shenzhen under the Stock Connect program reached $594 billion, up sharply from $211 billion a year ago, according to data from HKEx.

The total value of Chinese mainland-listed stocks held by offshore investors via Hong Kong under the Stock Connect program reached 347 billion yuan ($51.7 billion), up from 138 billion yuan as of the end of June 2016, HKEx said.

The mutual access program generated $162 million of revenue during the first half, or 2.6% of HKEx’s total revenue of $6.20 billion in the same period.

On Wednesday, HKEx also said its first-half net profit rose 17% to $3.49 billion from a year earlier on increased fees from trading and new listings, as well as higher investment returns.

Average daily turnover of stocks in the Hong Kong Stock Exchange rose 13% from a year ago, while the number of new listings grew 80% which was a record-high rate for the bourse, HKEx said. However, turnover of derivatives, particularly of commodities, dropped 13% amid sluggish global demand for metals.

During the first six months, HKEx fetched gains of $428 million from its own investments, up sharply from $82 million a year earlier. The bourse’s own investment portfolio includes low-volatility equities, U.S. government bonds and other asset-backed securities.

As competition among regional bourses heat up, HKEx has been marketing itself as the gateway to China for offshore investors. Last month, the exchange operator proposed to set up the so-called New Board, in addition to the Main Board and Nasdaq-equivalent Growth Enterprise Market.

The third board aims to attract new listings from so-called “new economy” and technology companies, including Alibaba Group Holding Ltd., which decided to list in New York instead of Hong Kong in 2014. One way to do that is for HKEx to take on companies without any record of turning a profit, but that has become a controversial proposal in the city because of concerns that such a policy would weaken the overall standards of corporate governance and investor protection.

HKEx is also planning new products to be launched on its London Metal Exchange platform to revive its commodities business.