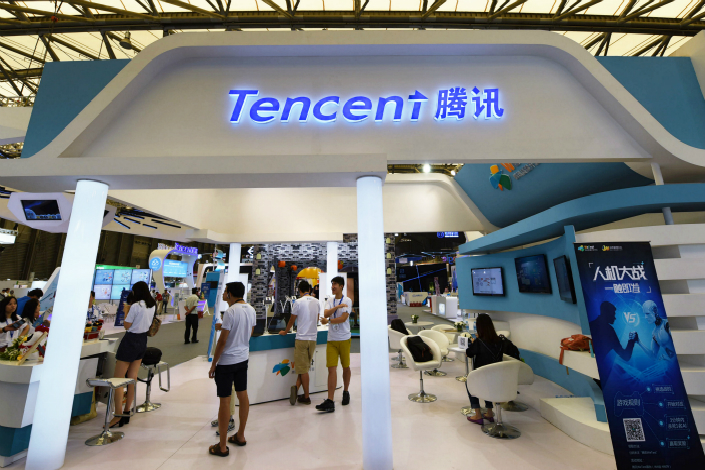 Tencent Holdings Ltd. on Wednesday posted record quarterly net profit and revenue on blockbuster mobile games and video, as well as stellar growth of the user base of its various social media networks.

However, the owner of the smash-hit mobile game “Honour of Kings” might have trouble growing its gaming business — the company’s biggest revenue source — as the Chinese government grows more concerned about internet addiction that has hooked millions of students and even some military personnel.

Revenue from online games, social networks and other digital content — Tencent’s biggest income source — rose 43% to 36.80 billion yuan from a year earlier. As of the end of June, active monthly users of Weixin and WeChat combined rose to 963 million, up 19.5% from a year ago. However, active monthly users of Tencent’s teen-targeted social network QQ fell 5.4% to 850 million.

“While our games business continued to grow, we have stepped up our effort to ensure users play games in a healthy manner,” Chairman Ma Huateng said in a statement.

Launched just two years ago, gaming sensation “Honour of Kings” has raked in nearly 2 billion yuan ($296 million) in revenue in a single quarter, turning it into a cash cow for Tencent, the company said earlier.

Every day, “Honour of Kings” hauls in 150 million yuan in revenue from virtual in-game gear, it added.

More than 200 million people were playing “Honour of Kings” in April, when Tencent last disclosed figures for the game. That means more than one-third of China’s 560 million gamers has waged war on the game’s virtual battlefield. Brought to life by an internal incubator of about 100 people at Tencent’s headquarters in Shenzhen, “Honour of Kings” has elegantly combined the round-the-clock flexibility of mobile gaming with social networking, an area where Tencent is indisputably king.

Online advertising, which accounted for 18% of the company’s second-quarter revenue, rose 55% to 10.15 billion yuan from the same quarter last year.

“Net other gains” — a category that includes a higher valuation of its investments in bike-sharing and fintech ventures, as well as gains from the disposal of Korean mobile game publisher Netmarble — also rose sharply to 5.13 billion yuan, up from 911 million a year ago.

“During the second quarter of 2017, we delivered strong revenue growth from multiple businesses, which enabled us to reinvest in innovations and new technologies in an increasingly competitive industry,” Ma added.