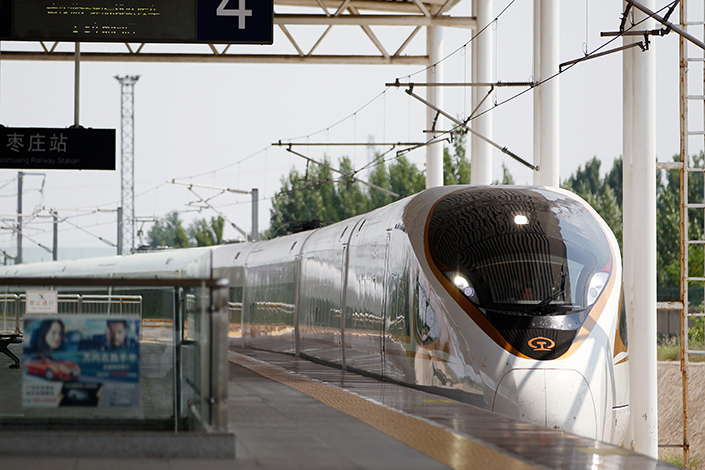 China's move to have the Beijing-to-Shanghai high-speed train run at 350 kph will make it the world's fastest. Above, a high-speed Fuxing train enters the Zaozhuang station in Shandong province on June 26. Photo: Visual China

Starting Sept. 21, China will speed up some of the trains between Beijing and Shanghai to 350 kph (217 mph), making the line the world’s fastest regular train service, Caixin learned from rail operator China Railway Corp. (CRC).

With trains running at a top speed of 350 kph, China will have high-speed trains faster than those of Japan’s Shinkansen system and of France’s TGV (Train à Grande Vitesse), the world’s fastest so far. The French and Japanese high-speed rail systems both top out at 320 kph.

The speed increase will apply first to the latest generation of high-speed trains, called Fuxing, which debuted two months ago. Higher speeds will cut the travel time between Beijing and Shanghai to as little as four and half hours. Currently, the fastest train between the two cities takes nearly five hours.

China’s other high-speed trains will continue to run at a top speed of 300 kph.

The decision to increase the speed was made after a group of experts in July assessed the feasibility and security of the Fuxing trains operating at 350 kph, a CRC employee said.

China, a vast country with tremendous demand for improved train travel, has been upgrading its rail system since 2004. The country’s high-speed railway system consists of 22,000 kilometers of track, with some major routes designed to handle speeds up to 380 kph.

Since the late 1990s, China has raised its train speeds from an average of about 50 kph to a maximum of 350 kph. The country launched its first high-speed rail line at least 100 kilometers long — between Beijing and Tianjin — in 2008. More high-speed rail lines followed.

However, after former Railway Minister Liu Zhijun came under investigation for corruption in February 2011, the new minister, Sheng Guangzu, decided to tamp down on Liu’s ambitious need for speed. Instead, he emphasized the safety of high-speed trains. Since July 1, 2011, all trains that could run at up to 350 kph were limited to 300 kph except on the Beijing-Tianjin line.

Just 22 days after the speed limit was set, two bullet trains collided in the eastern city of Wenzhou, killing 40 passengers and injuring about 200 others.

Railway authorities have since instituted stricter safety measures, which include applying the speed limit to the Beijing-Tianjin line.

Starting Monday, Fuxing trains will also start running between Beijing and Tianjin. It remains unclear whether they will again be allowed to go 350 kph.

“It depends on the specific conditions,” the CRC employee said.