By Coco Feng, An Limin and Zheng Lichun 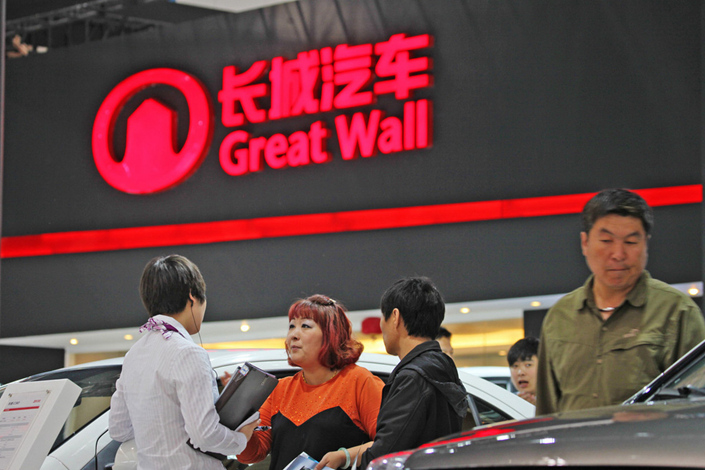 Automotive-industry experts are doubtful that Great Wall Motor Co. Ltd. could persuade Fiat Chrysler Automobiles NV to sell the Chinese automaker the Jeep brand, while acknowledging that such a move, if successful, would boost Great Wall's brand image and technology. Photo: IC

China’s largest SUV-maker, Great Wall Motor Co. Ltd., could end up hitting its own great wall if it acts on its interests in acquiring the storied Jeep brand.

But there’s only a 50% chance that Great Wall will secure a deal for Jeep, adding that the Chinese company is not globally prominent, said Eric Wu, a senior analyst with Guangzhou-based automobile consultancy Ways Information Technology Co. Ltd.

Jeep’s current owner, Fiat Chrysler Automobiles NV, is denying the reports, which began last week when U.S.-based Automotive News said an unnamed Chinese company inquired about buying Jeep from the Italian-American carmaker and had been rebuffed.

A Fiat Chrysler statement Monday said the company “has not been approached by Great Wall Motors in connection with the Jeep brand or any other matter relating to its business.”

However, Great Wall confirmed with Caixin on Monday that it has an interest.

A takeover of the Jeep brand would help Great Wall improve its brand image and technology, said Wu, adding that Jeep is the world’s most popular SUV brand.

And Jeep has been lucrative for Fiat Chrysler. In the Asia-Pacific market alone, the company reported the Jeep division’s operating profit doubled to 105 million euros ($123.7 million) last year from 2015. Fiat Chrysler attributed Jeep’s financial progress partly to “improved results from our Chinese joint venture” with GAC.

The market sparked speculation that the Chinese producer of Haval and other popular SUVs may follow in the overseas-expansion footsteps of Zhejiang Geely Holding Group, which bought Sweden’s Volvo AB from Ford Motor Co. in 2010.

Geely was also little-known when it bought Volvo for $1.8 billion.

John Zeng, general manager of automotive industry market intelligence at LMC Automotive’s Shanghai branch, said Geely got a good deal because Ford wanted to quickly offload money-losing assets in the aftermath of the financial crisis. He doubts that kind of a bargain would be repeated today.

Fiat Chrysler has signaled an interest in selling Jeep at the highest possible price by using an investment bank to disseminate high valuation estimates, Zeng said.

Some observers speculated that GAC was the unnamed suitor cited by Automotive News. But a GAC executive who declined to be named told Caixin the company is not negotiating to buy Jeep.

Yet if Great Wall buys Jeep, Zeng said, it will face long-term challenges tied to the world’s shift away from petroleum-powered vehicles.

Car buyers in nearly every major economy are expected to find electric vehicles cost less than gas-powered vehicles by 2029, according to a Bloomberg New Energy Finance forecast. And by 2040, it said, half of all newly purchased vehicles are expected to be electric.

Great Wall halted all stock trading in both Shanghai and Hong Kong bourses on Tuesday “pending the release of an announcement in relation to clarification of press articles.”