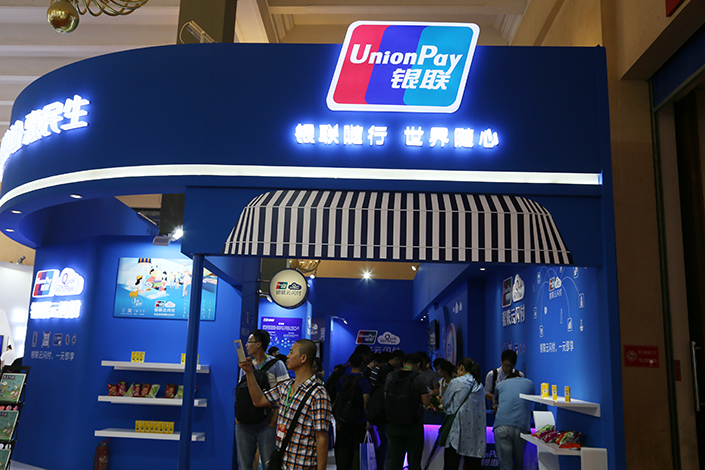 The boundary between China’s two cashless-payment clearing systems is not as well-defined as it seems.

When a shopper pays with a bank card, the transaction is cleared directly through China UnionPay, which settles the payment between the merchant and the card-issuing bank.

But when the shopper pays through a nonbank platform — a so-called third-party payment service provider such as Alipay or WeChat Pay — the transaction will be cleared through a central bank-administered clearinghouse, which settles the payment between the merchant and the platform to which the shopper’s commercial bank account is linked.

This division of labor, however, was questioned after UnionPay recently tied bank cards to online retailer JD.com Inc., essentially rerouting clearing traffic to the card-based network from a third-party payment platform.

“Honestly, when a market is already ahead of the regulations and authorities are still stuck with an outdated mindset, the market is bound to be confused,” an executive from a third-party payment company said.

Obliged to open up

On July 19, UnionPay started offering a touch-and-go payment service to JD.com customers, which was offered alongside the QR-code-based service provided by JD Finance itself.

By using the Near Field Communication (NFC) technology developed by UnionPay, JD.com customers who have a bank card can register for the service. By tapping a smartphone at an NFC-enabled card reader, one can now shop at over 10 million brick-and-mortar shops in China and abroad with a JD.com account.

UnionPay directly settles all transactions that are made with a JD.com account through its system, and the state-owned network will then have full access to transaction details, which the country’s authorities have always wanted.

After all, payment through these nonbank channels in China grew more than 80% last year, overshadowing the approximate 30% growth of card-based transactions.

In addition, China is obliged to soon open its domestic card clearance market to foreign players. Visa and Mastercard already said they are very keen on sharing the market with current monopolist UnionPay.

The boundary between the country’s two rival clearing systems are destined to be blurred.

But in the future, third-party payment providers will be able to choose to settle transactions through either UnionPay or the online clearinghouse, a central bank official told Caixin.

“But they will not be allowed to directly facilitate transactions with banks,” the official said.

Earlier, UnionPay urged regulators to draw a clearer line between a bank account and a bank card. For example, each time an Alipay or WeChat Pay user completes a transaction, money is directly transferred from a UnionPay-issued bank card linked to these online payment accounts.

Another central bank official, who is responsible for the payment market, told Caixin that bank accounts and bank cards are hard to distinguish from one another in China. Traditionally, bank clients would get a bank account before having a card, but some lenders combine the two for convenience.

That is why the online clearinghouse refers to a “bank code” instead of a “bank card number” when settling transactions to avoid conflict with UnionPay, executives from the clearinghouse said.

If they could choose, executives from third-party payment companies said, they would naturally pick the network that charges less or that offers more services.

As the central bank has asked all third-party payment platforms to clear all their transactions via the new clearinghouse by June, UnionPay is facing the prospect of bleeding even more transaction traffic.

The new clearinghouse nexus for China’s 54 trillion yuan ($8.1 trillion) third-party payment market, which was officially kick-started by the central bank in late July, will combine all of China’s payment companies under a standard set of clearing protocols and rules. This will end the longstanding practice that transactions from different companies are handled under different terms with banks, and falling outside the central bank’s oversight.