Why Did Father Die of Stab Wounds After Trip to Government Office? 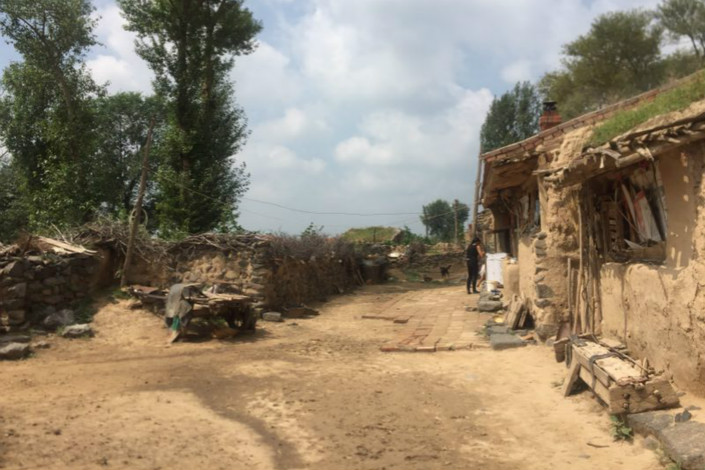 It remains unclear how the 49-year-old father ended up stabbed and bleeding on the floor of a government office. The government that administers the township said the wounds were self-inflicted — a conclusion that Yue’s family rejects.

The circumstances surrounding the death have drawn attention online, where the government’s account has been met with skepticism. Many others have held up Yue as the latest victim of rampant red tape and inefficiency at government agencies, particularly at the lower levels.

Shortly before his death, Yue took his family back to his hometown in Youyu county in North China’s Shanxi province. He had gone home to get the township’s stamp on a document needed for his 19-year old son to apply for a student loan.

Yue, his daughter, his two sons and his daughter-in-law went to the Lidayao township government office around 9 a.m. on Aug. 14. The government of Youyu county, which administers the impoverished township, attributed Yue’s death to “self-inflicted wounds,” according to a statement released three days later on a microblog affiliated with the county government’s publicity department.

Yue’s family has fiercely disputed the government’s conclusion. They said Yue had no reason to harm himself because he had been overjoyed by his younger son’s recent admission to a university, a badge of honor for poor families in China.

“My brother had even bought two chicken for our parents, whom he planned to visit after the trip to the township government,” Yue’s older sister told Caixin.

Several locals interviewed by Caixin said that whatever happened was likely to have been triggered by deep frustration among people who often have to visit government agencies multiple times only to find offices unattended.

Most government agencies do not accept appointments.

Awhile back, Zhang Xingyue, one of Yue’s uncles, had to make several trips to a township government office in Suocheng district, also in the city of Suozhou, to get a document that his son needed for a job application, Zhang said. He wasn’t able to get the document until he reached out to a connected friend.

Officials “often do this deliberately to force you to pay some money or to reach out to acquaintances on the inside for help,” he said.

Since Yue’s death, his immediate family has been kept at a secret location under “police protection,” according to a man who claimed to be the father-in-law of Yue Zhong, the deceased man’s oldest son.

Yue’s family was at the township government seeking an official document to confirm their status as an impoverished family, which entitles his son to cheaper student loans of up to 6,000 yuan ($900) a year, the father-in-law told Caixin. They waited outside the government office until 10 a.m. before Yue himself went inside to see if someone could stamp the document they needed.

Yue’s younger son, Yue Fei, told The Beijing News in an earlier interview that he went inside and saw his father lying near a pool of blood with stab wounds to his stomach and neck. There was also a knife nearby.

His father died while he was being transferred from Youyu County Hospital to a larger facility, the father-in-law said.

Cai Linghe, Lidayao township’s party secretary, told Caixin on Sunday that the family could not obtain the document because he, the township governor and the staffer who possessed the official seal were all on business trips that day.

The family ended up getting the official document on Sunday, the father-in-law said.