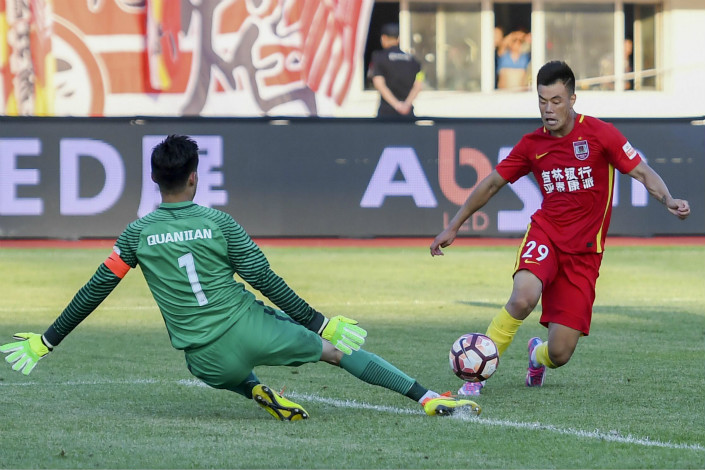 Beijing-based game-maker Crazy Sports will be allowed to develop and market Chinese Super League (CSL) games worldwide under a new partnership with the professional soccer league. Above, Changchun Yatai and Tianjin Quanjian play to a draw in 2017 CSL action. Photo: Visual China

In its Monday announcement, neither CSL nor game-maker Crazy Sports specified the value of the partnership, which will be nonexclusive and span 2017 to 2022, although Crazy Sports said it is over 100 million yuan ($15 million).

The deal comes a month after China Sports Media Ltd. (CSM), which holds broadcasting rights for the league, said it was trying to get another five years of rights for the 8 billion yuan it paid in 2015 for an initial five-year contract.

CSM was concerned that recent rules limiting the number of foreign players in the league could dramatically reduce returns on its hefty 2015 rights purchase, which it made when investment in China’s soccer scene was reaching a fever pitch. The industry has since calmed after major sports broadcaster LeSports suffered highly publicized financial setbacks.

If CSM successfully extends its contract, the CSL could lose revenue it would have gained from selling the broadcast rights for 2020 through 2025.

The Crazy Sports deal could offset that loss of potential revenue. Crazy Sports CEO Peng said he expects CSL-themed video games will bring in 1 billion yuan in revenue by 2020 through gamer payments. Crazy Sports will keep most of the profits, though the share it will give the league is expected to exceed the licensing fee.

Crazy Sports operated a sports lottery app, Cai365, until a ban on online sales of lottery tickets came into effect in 2015. The app had over 100 million users, most of whom bet on soccer matches, the company said, adding that there is a large overlap between people who buy soccer lottery tickets and those who play soccer video games.