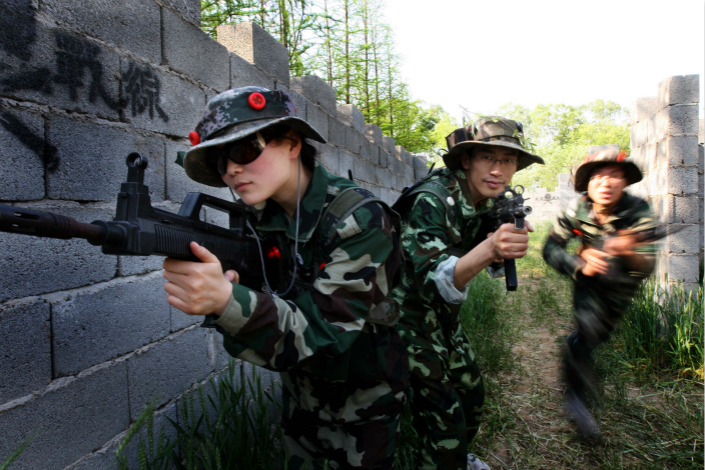 People.cn, the website of the official People's Daily, will buy a slice of military-buff website Tiexue.com, and will get representation on its directorial and editorial boards. Above, young people participate in play military maneuvers in Huaibei, Anhui province, in April 2011. Photo: Visual China

A privately run website for military buffs is getting a big state salute with an investment in Tiexue.com by the official newspaper of the Communist Party.

People.cn, the website of the official People’s Daily, disclosed that it will pay about 7.2 million yuan ($1.08 million) for a 1.5% slice of the online community whose name literally means “steel blood,” a reference to the unbending and upright quality of the 2 million people who make up China’s military, according to a statement to the Shanghai Stock Exchange, where People.cn is traded.

In exchange for its people’s stamp of approval, Tiexue.com will give People.cn representation on its directorial and editorial boards. People.cn will also get editorial representation on a wide-ranging site that includes ads for military attire; books and films; and articles on such varied topics as China’s recent conflict with India and the steamed dumplings consumed on naval ships.

The tie-up marks a feather in the cap of Tiexue CEO Jiang Lei, who set up the company in 2001.

“Through its successful development of the ‘Tiexue’ military culture brand over the last 15 years, Tiexue Technology has become a leading military website and seller of military e-commerce products,” People.cn said in a statement. “Establishing this strategic alliance takes advantage of both sides’ resources and strengths.”

While the civilian world celebrated the new tie-up, sources within the military said that Tiexue is largely a commercial venture that isn’t taken too seriously by actual members of the military. Instead, it is more designed for enthusiasts who enjoy dressing up in uniforms and reading the latest novels set in war zones, they said.

Such enthusiasts are partly behind the huge success of the recent box office hit “Wolf Warrior 2,” which has smashed records to become China’s best earning film of all time. The fast-paced nationalistic film about a rebellious former soldier who flaunts his manliness in a war-besieged region of Africa had taken in 5.26 billion yuan as of Thursday, just 29 days after its release, according to the website Maoyan.com.

“Those of us in the military see Tiexue as a hot-blooded commercial website. There’s no deep thought,” said an officer who works at one of the nation’s real military websites that isn’t open to the public, speaking on condition of anonymity because he was not authorized to speak to the media. “The People.cn investment should be good for them, like a booster shot in the arm,” he said.

Another member of the military said few of his friends use Tiexue, and most view it as a way for its shareholders to make money through commercialization of the military.

“I’ve known about this site for a while, and would occasionally browse it at one point,” he said, also speaking on condition of anonymity for similar reasons. “But later I stopped using it. My impression is that it’s mostly used by ordinary people as a sort of forum for military buffs. I don’t think real members of the military would use this website.”