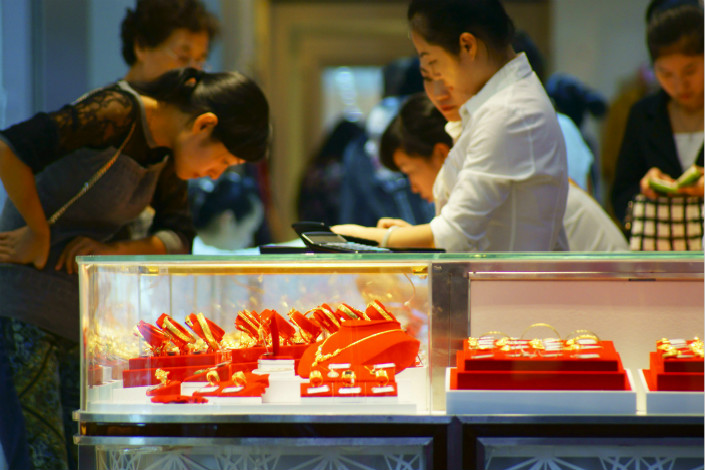 China National Gold Group Corp. will sell a major stake in its jewelry unit to a group of private investors, including e-commerce giant JD.com Inc., under a Beijing program to make big state-owned firms more dynamic through private-sector partnerships.

Other new investors in the unit, China National Gold Group Jewelry Co. Ltd., will include Citic Securities, Industrial Bank Co. Ltd., and five other private companies, the parent company said in a statement on its website dated on Thursday. It added that a signing ceremony had been held to mark the sealing of the deal.

China National Gold said more than 30 private companies had expressed an interest in participating in its mixed-ownership reform plan, which is part of a broader pilot program being rolled out by Beijing.

About 10 big state-run companies were selected for the program when it was announced in late 2015, including the parent of China Eastern Airlines and China Southern Power Grid. All of the companies have spent much of the last year crafting their plans, which typically involve choosing one of their units to participate in the program and then identifying private sector investors to buy stakes in that unit.

Under National Gold Group’s plan, JD.com, Industrial Bank, Citic Securities and four other partners identified as strategic investors will get 24.5% of the jewelry unit, according to the statement. A Beijing company identified as the lone industry partner will get 9.8%, while a group of top managers and employees will also receive shares.

In total, the new investors and management group will hold about 41% of the unit, which will raise 2.25 billion yuan ($337.7 million) as a result of selling shares. Such funds are generally intended for use to launch innovative new programs with the strategic partners. After a share enlargement that is part of the program, China National Gold Group Corp. will hold 43% of the unit.

“The next step will be to make a plan for listing Gold Group Jewelry Co. in an orderly fashion in order to take advantage of capital markets,” China Gold said. “We will continue to expand our market share, and work hard to boost our influence.”

China Gold’s announcement comes a week after Unicom Group, one of the nation’s three big telecom service providers, announced its own similar plan under the program. The parent of China Eastern Airlines also announced its own mixed-ownership reform plan in June, involving the sale of 45% of its Eastern Air Logistics unit to four outside investors.