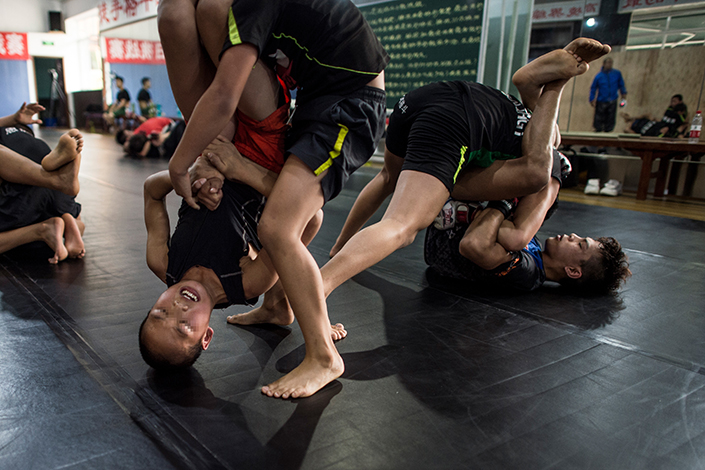 Although most of the Enbo Fight Club’s activities are government-sanctioned, Chengdu police opened an investigation into the mixed martial arts group after a video showing two 14-year-old boys in a bruising cage fight went viral last week. Above, boys grapple during a training session at the Enbo Fight Club in Chengdu, Sichuan province. Photo: Visual China.

The children were all from Yuexi county in Liangshan prefecture, one of the poorest areas in China, and many were orphans while some said their parents are disabled and unable to take care of them. Figures from Sichuan provincial health authorities show that Liangshan, an area with people from the Yi minority group, had over 25,600 HIV-positive people by the end of June 2013, accounting for half of the province's total HIV-positive population.

The decision to send back the children to their poverty-stricken homes comes after a police probe into whether they were forced into commercial fights and concerns that they didn’t have access to proper schooling. About 400 children had been recruited by the club since it was founded in 2001, according to the July video.

But, many of the teenagers being trained at the Enbo Mixed Martial Arts (MMA) Club in Chengdu told Chinese media outlets that they don’t want to be sent back as they might end up becoming drug addicts or toiling in factories.

Banmaduoji, 19, who is not among the group of underage fighters being sent home, told VICE China that training at the club had changed his life. “I could have been a herdsman tending hordes of sheep or become a small vendor at best,” he said. “Or I might just have ended up in jail for stealing things.”

The children will return to school in the new semester on September 1, according to Qugeermu, a county official in charge of monitoring media reports. He didn’t reveal details about the children’s age.

A short video streamed on Pear Video on July 20 documented the life of two 14-year olds training at club — both of whom aspired to win the Ultimate Fighting Championship, a Las Vegas-based mixed martial arts competition — set off a heated discussion on whether the teenagers were being exploited as fighters in commercial matches. The video was viewed more than 10 million times within days of being posted.

Amid the controversy, the local government in Liangzhou and police in Chengdu launched a probe into alleged mistreatment of the underage boys at the club. The investigation also focused on possible negligence among education and civil affairs officials in Liangshang.

The founder of the club, a retired paramilitary officer only identified by the name Enbo, told Chinese media outlets including Chengdu-based West China City Daily that he recruited the boys with approval from local civil affairs authorities and that 80% of the students had already dropped out of school before joining the club.

A person familiar with operations at the club told Caixin that most of the students had been sent over by their relatives or the civil affairs authority in Liangshan. Only a few were actually recruited by the club.

However the club could only offer tutoring for three nights a week and fewer than two hours for studies in subjects other than martial arts, such as Chinese literature and math, according to the source, who wished to remain anonymous.

This is far less than what is required under the country’s law for students in grades one through nine.

The club tried to send the teenagers to public schools in Chengdu, but to no avail as they couldn’t enter these schools without being registered as local residents in the provincial capital, Enbo said.

However, a stint at the boxing club gave them skills for a job when they grew up, he said. The school has trained more than 400 boxers so far, and many of them have gone on to become coaches in martial arts or security guards.

However, the club has been accused of forcing destitute youngsters into matches and shows at commercial venues to make money for the club.

The host of an MMA contest held in Chengdu on June 17 told Pear Video that at least two 12-year old boys from the club had boasted that they competed in an underground ring at the Poly complex in Chengdu every Friday. One coach also admitted on camera that the teenage fighters indeed brought in some money for the club.

The club has declined to answer Caixin’s questions about the accusations, but Enbo told The Beijing News in an earlier interview that the club spends 4 million yuan to 5 million yuan on the children each year and doesn’t take a cut of their earnings until they have been fighting in commercial matches as adults for three years.

The school, where students aren’t charged tuition, became so popular that one Liangshan township official rang up Enbo hoping to send over more students, Enbo said.

Ensuring that underprivileged students have access to basic schooling is in their best interest in the long-term, though skills in martial arts could help them make a living for a short time, said professor Tong Xiaojun from the Children Research Institute at China Youth University of Political Studies.

“About 80% of the teenagers wouldn’t make it to the level needed to become a professional martial artist, meaning training at the club will not lay a foundation for a sustainable career for them,” he said.

The key issue is that some of the impoverished areas like Liangzhou prefecture don’t have a proper child welfare system to guarantee that school-age children are taken care of in the absence of their parents and have access to basic schooling, Tong said.

A previous version of this story misinterpreted Caixin’s original Chinese report and overstated the number of Liangshan residents who are HIV-positive. We sincerely apologize for this mistake.