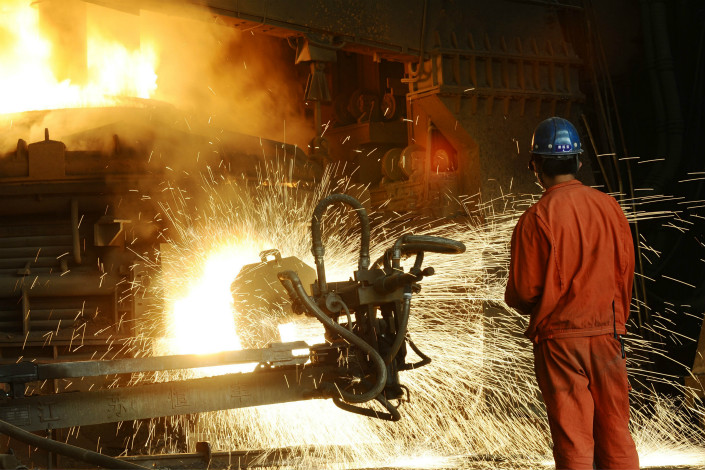 After a nearly 10-month tug-of-war between creditors and bankrupt Dongbei Special Steel Group Co. Ltd., the state-owned steel maker’s restructuring plan has been approved by the Intermediate People’s Court of Dalian.

Some creditors including bankers have raised a red flag after claiming they were forced to accept unfair financial conditions, apparently as part of a government bid to keep the company alive.

“Dongbei Special missed too many bond repayments, and the market impact was too great,” said an experienced bankruptcy lawyer who asked not to be named. Government officials “forcefully intervened” on behalf of Dongbei, the lawyer said, and as a result “the whole restructuring process can hardly be said to have set a good example.”

The plan released August 3 and obtained by Caixin calls for the debt-ridden state-owned enterprise (SOE) to fully repay every unsecured creditor holding no more than 500,000 yuan (about $75,344) worth of debt at face value. Any creditor with more than that amount may be repaid in cash at 22.09% of value, or accept a debt-for-equity swap.

The steel maker and its subsidiaries had defaulted on 10 bonds worth 7.1 billion yuan since March 2016, when the suicide of then-chairman Yang Hua marked the onset of a financial crisis that pulled hundreds of institutional investors into the mire and opened a new chapter in the history of the nation’s bond market.

Dongbei Special’s defaults on the publicly offered bonds were the first ever permitted by a Chinese government agency for a local SOE. Previously, troubled state companies and their bondholders enjoyed implicit government guarantees and sometimes outright bailouts.

Some Dongbei Special bonds are held by banks, whose combined credit exposure to the company as of May exceeded 44 billion yuan, said Zhang Zhaojun, deputy chief of the Dalian branch of China’s banking regulatory agency.

State-owned monoliths Bank of China, China Development Bank and Agricultural Bank of China are among the company’s biggest bank creditors.

Numerous bankers and bondholders told Caixin their institutions were forced to accept the bankruptcy reorganization plan hammered out by the company and government officials from Liaoning province, the home of Dongbei Special.

Bankers said government officials persuaded bank executives to accept the proposal or put their potential economic benefits from the government at risk.

Bondholders initially cried foul over Dongbei Special’s delayed financial reports. Before releasing a report in August, the steel maker had not issued a financial statement since September 2015.

The latest report said the company had assets worth 19.1 billion yuan and debts totaling 24.5 billion yuan as of October 10, 2016. Those figures show the company’s liabilities had barely changed since the end of 2014, although its total assets had fallen by 10.1 billion yuan.

One Dongbei Special investor who spoke with Caixin linked the sharp decline in asset value to a 9 billion yuan impairment that went unreported for a long period of time.

The bankruptcy lawyer said abnormal financial data and asset transfers are not uncommon among heavily indebted SOEs. But after a company files for bankruptcy, the lawyer said, debates over asset valuations and possible government intervention usually make it extremely difficult to protect investor interests.

Creditors said when they met with Dongbei Special and provincial government officials August 8, bondholders were not allowed to raise questions about the latest financial report and an audit. Their input was requested only when the time came to vote on the final reorganization plan.

“We were asked to vote right after the bankruptcy trustee read the restructuring plan,” said one creditor who asked not to be named.

According to a road map for tackling Dongbei Special’s financial problems drafted by the Liaoning government that surfaced in July 2016, government officials were concerned about “legal risks,” including potential lawsuits filed by creditors. The document also said government officials would take any necessary measures to avoid freezing the steel maker’s accounts and inventory.

Political motivations have been suspected in connection with a July decision by Jincheng Shazhou Equity Investment Co. and Bengang Steel Plates to invest a combined 5.5 billion yuan in Dongbei Special. In return, the firms were planning to receive equity shares of 43% and 10%, respectively, according to company statements. They apparently plan to help Dongbei Special stay afloat and eventually emerge from bankruptcy.

At the August 8 creditors’ meeting, an executive from Jincheng Shazhou’s parent company Jiangsu Shagang Co. Ltd. said without adding details that political as well as business motives were behind the final restructuring plan.

The bankruptcy lawyer questioned the independence of the court involved in Dongbei Special’s restructuring. Fundamental interests of creditors have been undermined, the lawyer said, and local government officials have meddled in SOE bankruptcy proceedings because courts failed to play a proper supervisory role.