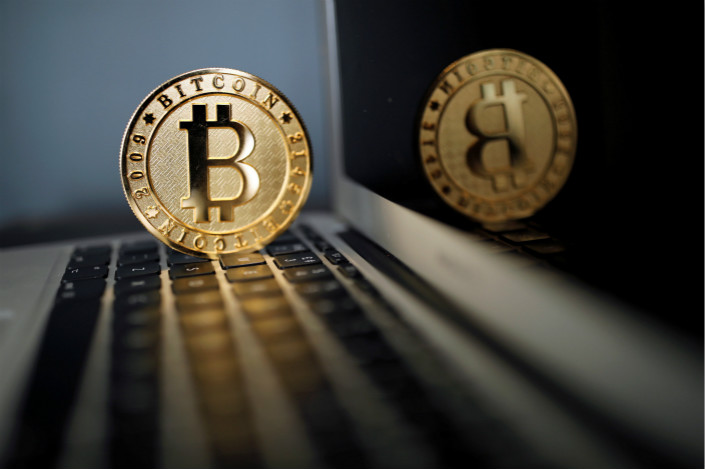 The regulation of initial coin offerings is on the radar of Chinese regulators as the market has grown very quickly, with Chinese investors snapping up $394 million worth of new virtual currencies through crowdfunding during the first six months of this year. Above, a visual representation of a bitcoin coin is seen at La Maison Du Bitcoin (Bitcoin House) in Paris on June 23. Photo: Visual China

The initial coin offering (ICO), mysterious as it may sound, is the latest crowdfunding phenomenon in which new cryptocurrencies make their debut.

The hype surrounding blockchain-based currencies continues unabated, not only because those virtual currencies have from time to time made headlines with their astronomical gains in value, but also because they are essentially outside the reach of most if not all regulators — at least for now.

Regulating ICOs is already on the radar of Chinese regulators as the market has grown very quickly. Investors in China snapped up 2.6 billion yuan ($394 million) worth of new virtual currencies through crowdfunding during the first six months of this year, a government-backed study found. The actual size is of the market could be much bigger, as the study did not include sales through private placements.

Potential risks and outright fraud prompted regulators in China and elsewhere to step in and demand more discipline and transparency. Here, the central bank and the securities regulator put their heads together to come up with a regulatory framework, and an outright ban is an option on the table, sources told Caixin earlier.

How does an ICO work in China?

The issuer of an ICO simply files a “white paper” to the public stating the function of the coin being issued and then finds a virtual-currency exchange on which the coin can be debuted. Unlike initial public offerings (IPOs), which require auditing and regulatory reviews, ICOs do not need to go through a lengthy approval and registration process.

The majority of the new virtual coins are purchased with other cryptocurrencies such as Bitcoin and Ethereum, while a smaller percentage is bought with cash. The coins can be later exchanged for goods, services and even company equity.

How popular are ICOs in China?

More than 100,000 investors have acquired new virtual currencies through 65 ICOs in the first half of the year, according to a study by the National Committee of Experts on Internet Financial Security Technology, a Chinese-government-backed industry organization.

What are the risks?

In addition to project failure and price volatility, many ICOs were allegedly used to scam investors. An announcement released by the National Internet Finance Association (NIFA) on Wednesday pointed to risks that could disrupt social and economic order, such as fraud and illegal fundraising, and asked investors to report illegal activity to police.

Most recently, the value of a cryptocurrency called “Shang,” which was released by a Shanghai software company, fell 20% after authorities said they were investigating the company on suspicion of false advertising.

What are Chinese regulators doing?

The People’s Bank of China and the China Securities Regulatory Commission are currently discussing ways to regulate the market, multiple sources told Caixin earlier. An outright ban is one option on the table, regulatory officials told Caixin on Monday.

The government has been leaning toward being skeptical of cryptocurrencies. In February, China’s two largest Bitcoin exchanges temporarily halted withdrawals as regulators questioned the use of the virtual currency for money laundering and capital flight.

Are there any regulatory lessons China can draw from overseas?

Other countries have started to bring ICOs under regulators’ grasp. The U.S. government said in July that ICOs need to be registered and treated as securities in most cases. Last week, Canada’s securities watchdog also said it plans to treat some cryptocurrencies offered through ICOs as securities.