By Li Jieyi and Yang Yitian 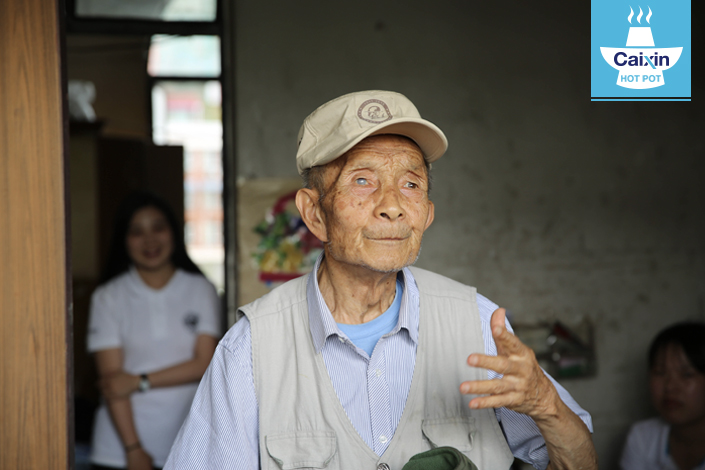 A dangerous expedition during World War II to recover the body of an American fighter pilot, buried deep in a mountain in Southwest China’s Yunnan province, is one of the career highlights of former Chinese military interpreter Wang Bingqiu.

Wang was only 21 years old when he started serving the U.S. 14th Air Force that operated from Kunming. The unit was part of the U.S. Army Air Corps, a predecessor of the country’s present-day Air Force.

“Afraid of bandits, the three soldiers who were with me didn’t want to go up the mountain. I was young and aggressive, so I decided to go myself,” said Wang, who is approaching his 95th birthday. After an eight-hour search with the help of local police and a few farmers, Wang managed to locate the body of the American airman and later repatriate his remains.

Wang had just completed ninth grade at a renowned missionary school in Beijing when full-scare war broke out against invading Japanese forces.

“I heard the first shot while I was lying in bed, and this was seen as the beginning of China’s War of Resistance Against Japanese Aggression,” Wang said. The war, known in the West as the Second Sino-Japanese War, would last more than eight years, ending with Japan’s surrender to Allied forces in World War II.

“At that time, I had just finished grade nine. My mother decided to take me to Yunnan province and wanted to find my father, who was there working as a railway engineer. We passed Zhejiang, Jiangxi, Hunan, Guangxi and Guizhou provinces and finally arrived in Kunming in December 1938,” he added.

Wang said it was his mastery of both the Yunnan dialect and English that got him a job as a military interpreter for a small group of U.S. fighter pilots operating out of Yunnan against Japanese forces in the region.

The 14th Air Force was the successor of the U.S. Army’s China Air Task Force, which had arrived in the country in July 1942. Many of the task force’s members came from the then-recently disbanded American Volunteer Group (AVG), better known in the West as the “Flying Tigers,” a group of volunteer U.S. airmen operating under the auspices of the Chinese Air Force.

Caixin sat down with Wang to talk about his war time experiences at his house home in the Yunnan city of Mengzi. The following are excerpts of that interview.

Caixin: You began working as a military translator with the U.S. 14th Air Force division from 1944. How did you get this opportunity?

Wang: In 1944, many American volunteers came to China to help with the war (against Japanese forces). A large number of military translators were needed. The Kuomintang decided to recruit translators publicly, especially among young students. At that time, Kuomintang Chairman Chiang Kai-shek was the leader of the Central Military Commission as well as the commander of the Central Training Corps. In the Central Training Corps, which was located in Chongqing, students who had been chosen as translators were trained for about six weeks. Lessons such as military terms, aviation language and American slang were all included.

After that, we were sent to Kunming, Yunnan province. And I became a translator in the U.S. 14th Air Force.

How difficult was the selection test?

We just had an oral test. At that time, a large number of translators were urgently needed. As long as your oral English wasn’t very poor, you would be selected. I had my junior high school in an American Missionary School called Yu Ying Academy, located in Beiping (the name of Beijing at the time). It was run by the Episcopal Church in the U.S. (Editor’s note: According to historical data, Yu Ying Academy was run by the Congregational Church.) I can still remember that we had an American vice president called Shao Zuode. Many teachers in that school were Americans, so I had a foundation in the basics of English language there.

Did your parents know you were going join the Army? How did they react?

Yes, they knew it. But it was no use worrying at that time. Young people should fight for their country and do their part. This is what I thought. At that time, I was young, and I wasn’t afraid. So my parents didn’t say anything to me.

The Army had a disciplinary rule that didn’t allow us to write letters. The American Army was quite impressed with me at that time. They would take me home in a jeep when I was free. I helped the American Army a lot, so they also thanked me. In 1945, when the Kuomintang was going to eliminate the local armed forces in Yunnan, my cousins were studying in a school of the blocked area and had nothing to eat. The American Army also drove me to their school and brought them some cakes and bread.

Did you ever go to the front line?

I had joined the Army in December 1944, and the Japanese surrendered in August 1945. That means I served in the Army for less than a year.

In most of my service time, I stayed in Wu Jiaba, where the 14th Air Force’s main airport was located.

Considering that I can speak English as well as the Yunnan dialect, our Army general usually gave me some missions involving these two languages.

I’ve been to some places in central Yunnan for missions, such as Yuxi and Lufeng, but never was at the front line and I never carried a gun.

What was your most memorable wartime experience?

At that time, Col. Geoff B. Fisken, who was the chief of staff of the 5th Division of the Kuomintang’s National Revolutionary Army, was looking for an interpreter who could speak both the Yunnan dialect and English. So they found me finally.

One day in 1944, a U.S. plane carrying supplies crashed in the mountain area in Lufeng county, Yunnan, with five of the six personnel on board injured and one killed. Due to the prevailing conditions, the five survivors were rescued and taken down the mountain, but the body of the deceased American soldier was buried in the mountain. After six months, they sent me and three American soldiers to find his body.

Afraid of bandits, the three soldiers didn’t want to go up the mountain. I was young and aggressive, so I decided to find it myself. I searched from 8 a.m. to 4 p.m. with the help of two policemen and five local farmers, and we finally found the place where the plane crashed. We found the body and dug it out, and walked down the mountainous roads with the body another eight hours until 2 a.m. the next day.

Did you win any awards or any medals of honor for your services?

After the operation, Fisken praised me, and he said that I was a great young man. When the Japanese surrendered in 1945, there was another American plane that crashed in Zhaotong, Yunnan. They were planning to send me again. But because the war had ended and I was going to go back to school then, I refused. So I did some work during the wartime. Since it’s not a huge contribution, they only gave me verbal praise.

Did you keep in touch with the U.S. military officers that you worked with after the end of the war?

No. After the war, I went back to Chongqing to go to school. But I knew that some of the dead pilots’ bodies were sent back to the United States, but some of them were buried in Kunming. Later, I translated a book related to the U.S. 14th Air Force, which was called “The Actual Combat Record of the P-40 Warcraft During the Second World War.”

Looking back at the past nine decades, are there any insight in life that you can share with us?

The first tip is perseverance. My major was hydroelectricity generation when I was a university student. I became an electrical engineer after graduating from Jiaotong University. In 1955, I was accused of being a counterrevolutionary and was sent to work in a farm in the country for about four years. After that, I couldn’t find a job because I was labeled a “counterrevolutionary.”

I was only restored to my earlier position as an engineer after Deng Xiaoping became the leader of China.

The second tip is, do the thing you love to do. Becoming an engineer was my father’s advice. He had told me that if I didn’t learn mathematics well, I wouldn’t have a good future. The result was that I felt very pained as an engineer. If I could have used my talents in languages to do something, I might have had a different life.

After the four years of hard labor in the countryside, you said you couldn’t find any work as an engineer because you were branded as a counterrevolutionary. What did you do during that period?

I went to Gejiu city in Yunnan, which was called the “tin capital” in China, and worked there as a tin worker. Sometimes we went to the river looking for tin ore. I had worked there for about 20 years. President Deng Xiaoping restored me to my position as an engineer after he came to power.

During the war against Japanese forces, the Ministry of Education in 1937 decided to move “Changsha Temporary University,” which was composed of National Peking University, the National Tsinghua University and the Private Nankai University, to Kunming. This institution was renamed National Southwestern Associated University and produced outstanding scholars like Chen-Ning Yang, who won the Nobel Prize in physics. Do you have any memories of this university and how it operated during the war?

I didn’t take classes at the Associated University because I was a young boy at that time. … But I slept in the dorms (of my friends there) several times. The students lived in hardship. Their bunk beds were made of wood. When we climbed up and down, the mattresses would sink in through the gaps between the wooden planks.

Every month, each student received 25 yuan (about $4 at the time) as an allowance. In addition to buying food, students had to save money for kerosene oil for lamps so that they could read at night. In order to increase the brightness, they usually put a mirror at the back of the lamp.

Some teachers and senior students told me about what happened as they relocated the university. They had left they hometown to evade gunfire, but they never stopped conducting lessons. Sometimes the teachers used branches as chalks and wrote on the sand to teach.

Caixin Hot Pot is a regular feature that introduces you to the colorful array of players in today’s China – from the leaders of top U.S. companies doing business here to the migrant woman selling noodles from a pushcart.