China Trust Sector Expands — and So Do Risks 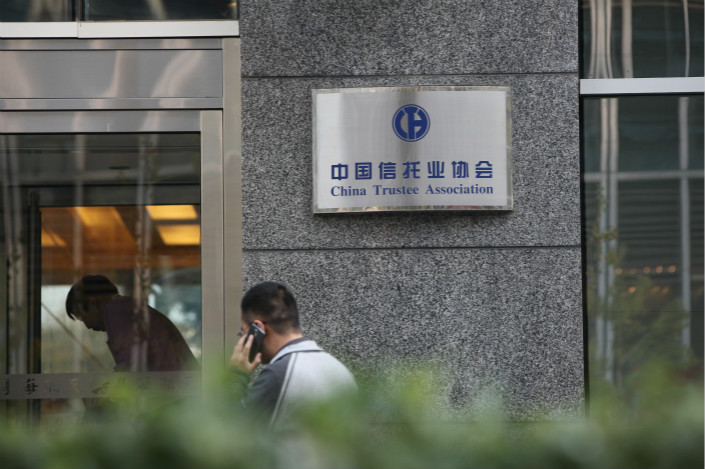 As of the end of June, total trust assets in China stood at $3.53 trillion, up 5.33% from a quarter earlier, according to data from the China Trustee Association. Regulators have tried to curb growth in this corner of the financial system as it has the potential to exacerbate systemic risks. Photo: Visual China

As China’s trust sector expands, more than half of the $3.5-trillion industry is being managed through intermediaries that act as “channels” in a complex web of financing outside the formal banking system, an industry body said Monday.

The channeling business in China has grown exponentially in recent years, as banks, companies and high-net-worth individuals invested customers’ deposits or their own cash in high-yield products via nonbank vehicles such as trusts to achieve higher returns.

Regulators have tried to curb growth in this corner of the shadow banking system as off-balance-sheet activities beyond the reach of regulators could easily escape institutional oversight and exacerbate systemic risks.

As of the end of June, total trust assets in China stood at 23.14 trillion yuan ($3.53 trillion), up 5.33% from a quarter earlier, according to the China Trustee Association. Quarterly growth slowed from an 8.65% rate in the first quarter of 2017.

In the second quarter, 53.92% of the assets managed by trusts are in fact channels, up 1.66 percentage points from the first quarter.

Being a channel means that these trusts do nothing on their own to manage their assets, but rather follow the instructions of the trustor. Nearly 90% the 1.17 trillion yuan that flowed into the trust sector during the second quarter are now under such passive trust management.

Financial institutions such as brokerages, insurers and trust companies can all act as channels. While both insurance and securities market watchdogs have stepped up efforts in the second half of 2016 to restrict the channeling business, the regulator of asset management industry has apparently been slow to react, which in part explains the vibrancy of the channeling business in the trust industry, market watchers said.

Financial regulators made a bold and unprecedented display of unity in February by proposing, for the first time, one overarching regulatory framework that targets the more than the 100 trillion-yuan asset management industry, Caixin reported earlier. But there hasn’t been much progress announced since then.