Five-Star Hotels in Beijing Get Down and Dirty 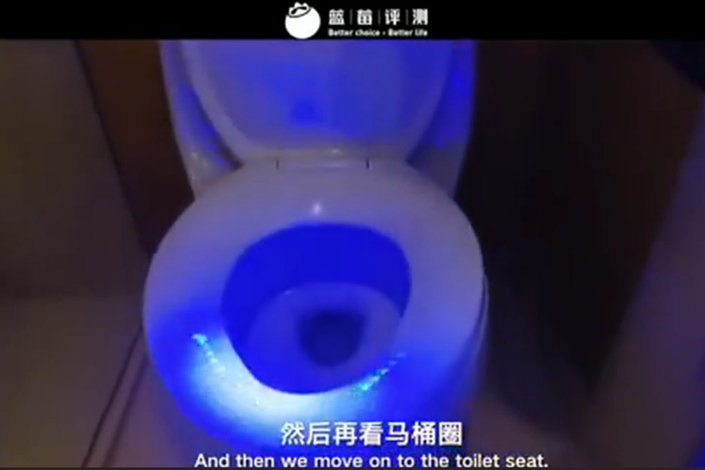 At five luxury hotels in Beijing, testers from an “independent review organization” Lan Mei Test marked bathroom surfaces with a kind of washable ink that is only visible under black light, the organization said. They then checked back into the same rooms a day later to see if the ink had been wiped away. Much of it remained. Photo: Lan Mei Test

Inspired by tests conducted abroad by a U.S. publication, Lan Mei Test inspectors marked sheets and bathroom surfaces in rooms at the five hotels using a kind of washable ink that is only visible under black light, the WeChat post said. They then checked out and checked back into the same rooms the next day to see if the markings were still there. None of the hotels had cleaned their bathtubs, and other lapses such as unchanged sheets were noted, according to Lan Mei.

Four of the hotels have issued statements addressing the WeChat post, saying that they are taking action to investigate the allegations. The Hilton did not respond to Caixin’s request for comment. “We take hotel hygiene and cleanliness very seriously,” a W Beijing statement said, echoing the other hotels’ responses.

The Beijing Health Inspection Bureau is already looking into the issue and will inspect all five-star hotels in the city this week, CCTV reported Tuesday.

Additionally, the Health Inspection Bureau of Dongcheng District, in central Beijing, said online that it has conducted checks of eight five-star hotels within the district and found “no hygiene problems.” The district bureau also said that, although none of the hotels mentioned in the Lan Mei post were in Dongcheng, it would bring up the post at a hygiene meeting of Dongcheng hotel managers on Friday.

Although Lan Mei said its reviewers had arranged bedding to look like someone had slept in the hotel rooms on their first visits, Lan Mei’s post may not accurately reflect how hotels clean up after real guests, said Wu Ben, an assistant professor of tourism at Fudan University.

It’s hard to tell how convincingly Lan Mei “messed up” the beds, Wu told Caixin. And to save resources, it’s common for many housekeepers not to wash “visibly unused items like bedding, and towels.”