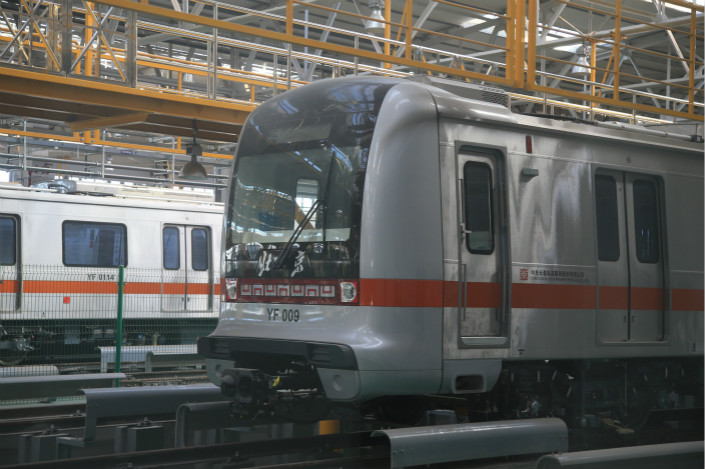 Subway systems are among the projects that have been funded through public-private partnerships, the draft regulations for which have drawn criticism. Above, a subway train makes a test run on Feb. 17 on the under-construction Yanfang Line, which will be Beijing's first driverless subway line. Photo: IC

(Beijing) — It’s alphabet soup, and China is trying to figure out PPP.

The recently unveiled draft regulations on public-private partnerships (PPPs) in China have drawn fire for their lack of clarity and omissions of key issues that critics say are necessary for the partnerships’ success.

In July, the Legislative Affairs Office of the State Council, China’s cabinet, issued a draft of the “Regulations on Cooperation by Government and Social Capital in the Infrastructure and Public Service Fields” for public comment. The public comment period ran through Aug. 22.

Once finalized, the rules will be the country’s highest-level legislation so far for regulating PPPs, a program the government introduced in late 2013 to allow investors to help local authorities fund infrastructure projects. The program is an attempt to make up for the financial shortfalls that have emerged in the crackdown on shadowy local government debt.

The legislation aims to “improve the quality and efficiency of supplying public services, protect the legal rights of public interests and private investors, and promote the sustainable and healthy development of the economy and society,” according to the text of the draft.

However, experts received the draft cautiously, lamenting that it did not answer several questions key to resolving existing problems with PPP projects.

The stakes are high for a program that as of the end of June has logged 16.3 trillion yuan ($2.50 trillion) in planned total investment, according to figures from the Ministry of Finance.

The regulation should guide the development of PPP projects over the next 10 years or longer so the government shouldn’t rush to implement one that is imperfect, said Li Kaimeng, head of the research center of China International Engineering Consulting Corp. The company is a state-owned giant that provides consulting services to help the central government with its decision-making about investment and construction projects.

“Many issues remain murky” in the draft rule, he said.

Some deals never came through. For example, 338 projects were removed from the ministry’s list in the first half of this year. One of the main reasons was that they were unable to attract enough private investment, the ministry said.

One of the shortfalls of the draft rule is that it did not provide a clear definition of what the legal relationship between project partners should be. The lack of clarity has been blamed in part for holding back private investors from participating in PPP projects because it could hinder investors from protecting their interests if a dispute were to arise, analysts say.

“The legal definition of PPP contracts is essential for resolving contract disputes and ensuring the amount of compensation” for private investors, said Zhang Liao, chairman of the Shanghai-based firm Jumbo Consulting, which specializes in providing consulting services in the infrastructure and public utility sectors.

The cloudy legal definition has been an issue since the PPP program began. The National Development and Reform Commission (NDRC) — China’s top economic-planning body — and the Finance Ministry still disagree about what it should be.

The NDRC maintains that a PPP agreement is an authorization of franchising rights by the government to private investors, which critics say puts private players at a disadvantage in disputes. The Finance Ministry, however, contends that the government and private investors should stand on more equal footing under civil and commercial law.

But he added that although the draft PPP regulation left the relationship definition vague, it made a progress by not branding it as a franchise.

The draft also did not require a value-for-money (VFM) analysis. This kind of analysis seeks to determine whether replacing the government way of investing in and operating a project with a PPP arrangement is cost-effective and/or improves the quality of the public service.

Instead, the draft stated only that authorities should carry out an assessment on whether adopting the PPP model was “necessary and reasonable” in terms of its economic and social benefits. Some experts blasted the omission as a failure to highlight one of the main selling points of PPPs — that they can be more cost-effective than traditional government projects.

“If PPP regulations and policies do not include (the requirement of) VFM analysis, it means the development (of the partnership) is still at a primitive stage, in which economic growth and the quality and efficiency of investment are not priorities,” Jiao Xiaoping, director of the MOF’s Public Private Partnerships Center, said at a forum a day after the draft was published.

The Finance Ministry has insisted that VFM analysis, along with fiscal affordability assessments, must be conducted before a PPP project is implemented.

In practice, however, VFM analyses have become mere formalities due to incompetence in analyzing the data and deliberate distortion by stakeholders, including some local officials, who see PPP projects as nothing more than another way to raise funds and hide debt, experts said.

“It is inappropriate to apply the PPP model to projects without holding up the principle of value-for-money,” said Wang Shouqing, a professor in construction management at Tsinghua University who participated in compiling other PPP regulations by the NDRC.

The situation over the last three years has not given local governments any reason to pay attention to the management innovation and efficiency improvement aspects of PPPs. Rather, they have solely concerned themselves with using PPPs to raise money, Wang said.

“The PPP rule should not abandon the value-for-money principle because the analysis is not being properly carried out. Rather, the role of (the analysis) as a policymaking tool should be strengthened,” he said.

A common concern about current PPP projects is that a large proportion of them have been misused by local authorities to disguise debt as equity. It isn’t exactly what Beijing had in mind when it introduced the PPP program to curtail the growth of opaque local government debt.

To get reluctant investors on board, some local governments secretly signed side agreements with their partners that pledged to buy back the stake in the projects or to pay them dividends at fixed rates. In many cases, state-owned or state-backed enterprises and financial institutions have gotten counted as “private” partners partly due to difficulties in attracting capital that wasn’t tied to the government somehow.

In February, the Finance Ministry asked Central China’s Hubei province to investigate a PPP deal in the provincial capital of Wuhan after the project published shareholder information showing that all of the “private investors” were banks. Similar problems were uncovered in contracts to build public transportation in the eastern province of Shandong and the southwestern province of Guizhou.

The draft PPP rule tried to tackle the problems by banning side deals between local governments and their investors that promise stake buybacks or minimum return rates. It also prohibits local governments from guaranteeing the financing.

However, the draft was sketchy on guidelines about how the projects could raise funds based on their own evaluation, as opposed to the government’s endorsement, which is an issue critical to the success of the PPP model, observers said.

Tsinghua University’s Wang called for regulations on project financing — a loan structure in which debt and equity are paid back from the cash generated by the project.

Under the lending structure, creditors have restricted or no claims on the debt in the event of default, with limited or no recourse.

“If the PPP rule does not incorporate issues concerning project financing, financial institutions will still prefer to … rely on guarantee letters issued by the (local) governments or the possibility that the loan will eventually be counted as a government debt,” Wang said.

“Such practices constrain how much investors can invest and are unhelpful for the reforms of financial institutions,” he said.

Fang also believes that the rules should encourage lenders to go for project financing, which will help them establish a pricing regime based on a project’s risk.

“PPPs will lose their growth momentum if the project financing market does not develop and improve,” she said.