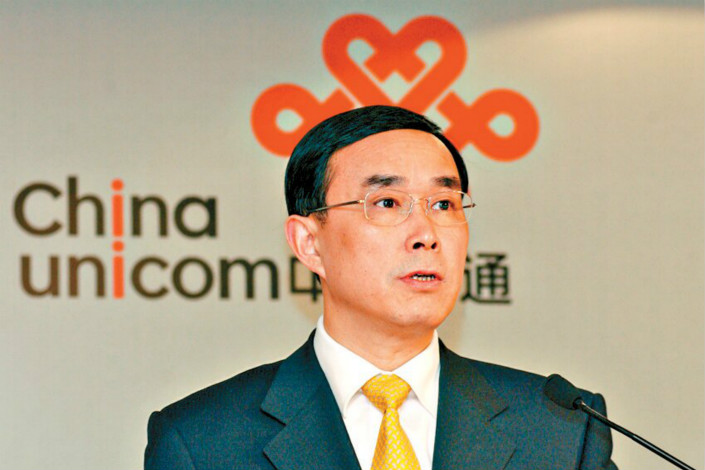 An article in the official magazine of the Central Commission for Discipline Inspection says that in December 2014, then-China Unicom Chairman Chang Xiaobing was found to be keeping in his office dozens of luxury phones, plus jewelry, tobacco, liquor and tea, among other items. Photo: Visual China

Chang Xiaobing, sentenced to six years of prison this year for graft, kept a storeroom in his office filled with expensive liquor and valuable paintings during his time as chairman of state-owned China Unicom.

Details like this about the Central Commission for Discipline Inspection (CCDI) investigation of Chang in 2014 emerged this week in the CCDI’s official magazine, which ran a short article describing the day CCDI officials paid a surprise visit to Chang’s office.

In late 2014, after the CCDI had uncovered large amounts of shopping vouchers, phones and other items received as bribes in senior Unicom executive Zhang Zhijiang’s office, they turned their eye to the very top of the organization — in other words, Chang — the magazine reported.

One weekend that December, CCDI inspection team leader Ning Yanling and a colleague showed up unannounced at Chang’s office in China Unicom’s Beijing headquarters. Flustered, Chang’s secretary called the chairman, who hurried to the office.

When Chang arrived, Ning gestured at a cabinet filled with gifts behind Chang’s desk, which Chang said contained only “inexpensive things” given by business acquaintances, the CCDI article said. Chang then allowed Ning and his colleague to look in other cabinets and drawers.

The CCDI team found one drawer filled with dozens of luxury phones, still in unopened packaging. Gold and silver jewelry — including at least a dozen necklaces — were found scattered around the office.

The investigators also found a locked door in the office, which Chang asked his secretary to open. Behind it was a room stocked with pricey items that included high-end tobacco, liquor, tea, calligraphy and paintings.

After Chang’s cache was discovered, he admitted to Ning that he had committed a number of discipline transgressions, including the “improper” appointment of personnel, the CCDI publication said. Chang’s confession led the CCDI to widen its investigation into China Unicom as part of an ongoing nationwide crackdown on corruption.

Nevertheless, Chang went on to become chairman of China Telecom, another state-run telecom company, in September 2015. In December that year, Chang was taken into custody for what the CCDI called “serious violations of party discipline,” a common party euphemism for graft.

In April, Chang pleaded guilty to charges of taking 3.76 million yuan ($578,400) in bribes between 1998 and 2014, while he was a senior official of the then-Ministry of Post and Telecommunications and later as chairman at China Unicom. On May 31, Chang was sentenced to six years in jail.

The details about Chang’s case released this week mirror other cautionary tales about corrupt officials caught with stockpiles of illegally obtained luxury goods.

In 2014, anti-graft officials found more than 100 million yuan in cash at the Beijing home of Wei Pengyuan, the then-vice director of the National Energy Administration’s coal department. Police had to bring in 16 counting machines to count all the money.