By Wang Xiaoqing and Song Shiqing 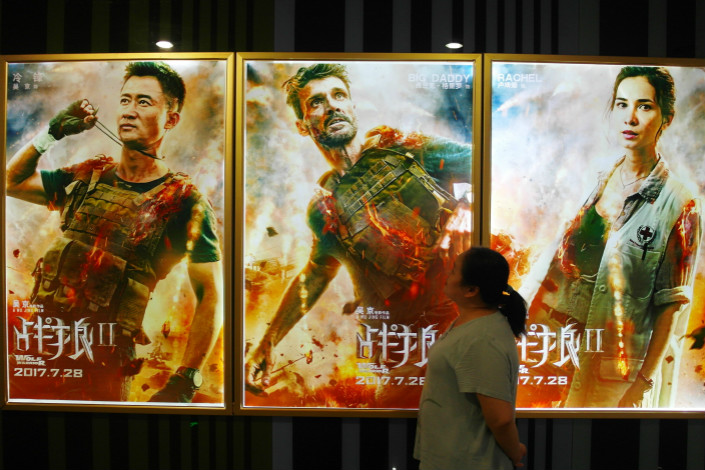 The surprise Chinese movie hit "Wolf Warrior 2" has raked in $852.6 million globally in only six weeks. Above, posters promoting "Wolf Warrior 2" are displayed at a movie theater in Yichang, Hubei province, on Aug. 20. Photo: IC

Minions, beasts and galaxy guardians beware — the wolf is on your trail.

Ahead of it on the list are four Hollywood blockbusters: “Beauty and the Beast,” “The Fate of the Furious,” “Despicable Me 3” and “Guardians of the Galaxy Vol. 2.” But the Chinese action flick has been in theaters a mere six weeks, far less time than its American competition.

The surprise hit smashed domestic records in under two weeks, and has now raked in $852.6 million globally, according to box-office provider Box Office Mojo.

The film’s unexpected success is due largely to its unabashed use of patriotic themes, said its chief producer, Li Yang.

The storyline — which features the film’s director, Wu Jing as a fearless former soldier saving fellow Chinese and local African civilians from a band of tyrannical mercenaries — has also tapped into an older demographic of viewers in their 50s and 60s.

The film had low initial box-office expectations, at around 120 million yuan ($18.5 million), but became the highest-grossing Chinese-language film of all time in early August, pulling in $521 million domestically. That figure grew to $848 million as of Sept. 3, and looks set to continue.

High-performing Hollywood films generally see over half of their revenue come from overseas markets. Chinese films are much more dependent on their domestic market. “Wolf Warrior 2” is no exception, pulling in 99% of its intake from Chinese moviegoers.

The film is the first non-Hollywood release ever in the top 100 all-time highest-grossing films worldwide, currently at 54.

Among the film’s 15 investors, the one with the smallest share has reaped more than 100 million yuan ($15 million) in return, said Li, who is also the chief producer of its predecessor, “Wolf Warrior” — the 2015 original that features the same director and largely the same cast.

Li said the production team did not intend to make a nationalistic movie when they created the series. Instead, it was an outcome of their more than 10 years of trying to craft market-friendly military-themed stories.

“Indeed, the ‘Wolf Warrior’ series has created a new film genre (in China) that combines action and military themes,” said Li, who is a seasoned producer of military-oriented movies and TV series.

Li pointed out that the film’s funding did not include military sources. “There have been hundreds of military movies and TV shows in China over the past 10 years,” he told Caixin. “All of the investment came from private sources or the state. Not a single penny was from military spending.”

Li disclosed that the third “Wolf Warrior” installment is now in preproduction, but no timetable has been released. The production team has already developed the new storyline, but said it’s unlikely to surpass “Wolf Warrior 2,” Li acknowledged.

The team is not sure where to start under the enormous pressure created by the film’s success, which, according to Li, has “reached the 8,848-meter (29,029-foot) summit of Mount Everest.”