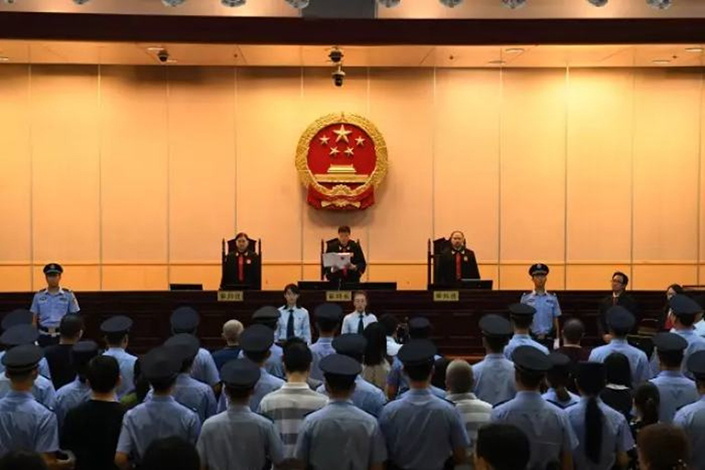 A Chinese court on Tuesday handed down two life sentences and a series of hefty fines on the senior executives and operators of Ezubo, the now-defunct online peer-to-peer (P2P) lender, for engaging in fraudulent fundraising and smuggling precious metals.

Twenty-four other Ezubo employees were given prison terms ranging from three to 15 years and fined undisclosed amounts, according to the court.

The operators of Ezubo — Anhui Yucheng Holdings Group and Yucheng International Holdings Group — were ordered to pay a combined penalty of 1.9 billion yuan. The court said they sold wealth-management products online without proper banking licenses and raised large sums from the public to invest in the underlying assets in leasing contracts that did not exist.

Ezubo was a leading online P2P lender until police shuttered it in December 2015. According to the official Xinhua News Agency, Ezubo swindled about 900,000 investors across the country of more than 50 billion yuan beginning with the company’s launch in July 2014 through 2015, using a Ponzi scheme that promised high yields on their investments.

Law enforcement officers have recovered some of the funds, equity stakes, properties, automobiles, gold products and jade, the court statement said. The recovery process is still underway, and investors will likely be partially repaid for their losses, the court said.

China’s online P2P lending sector started to boom in the middle of the last decade as the government sought to further boost the economic growth stimulus. It provided a lifeline to thousands of small companies and individuals who couldn't get access to bank loans because they lacked the assets that could be pledged as collateral.

But P2P lending in China — which was subject to far less supervision than the formal banking sector — morphed from the simple idea of allowing people to borrow money from others into a channel through which companies could get loans quickly and skirt policy restrictions, including those limiting loans to property developers.

In addition, the online P2P sector in China has been plagued with scandals. More than 1,700 P2P platforms were closed in 2016 after failing to repay investors, according to Wangdaizhijia — Mandarin for “Online Lending House” — a research firm that tracks the online-lending industry. So far this year, the figure stood at 458, and still in some cases, managers absconded with the funds.

The era of unchecked expansion seems to have passed amid the regulatory tightening. In August 2016, the China Banking Regulatory Commission and three other central government agencies published the first set of unified regulations to clamp down on fraud, including imposing ceilings on how much a person or company can borrow through a P2P website and banning the practice of pooling investor money to make loans.

Regulators have followed up with more rules, including requiring lending platforms to appoint commercial banks as custodians of investor funds, and disclosing more information to protect users of the online P2P lending.

The crackdown has forced many P2P lending companies to close down. The number of online P2P platforms fell to 2,065 in August from 2,712 in September 2016, according to financial information provider Wind.