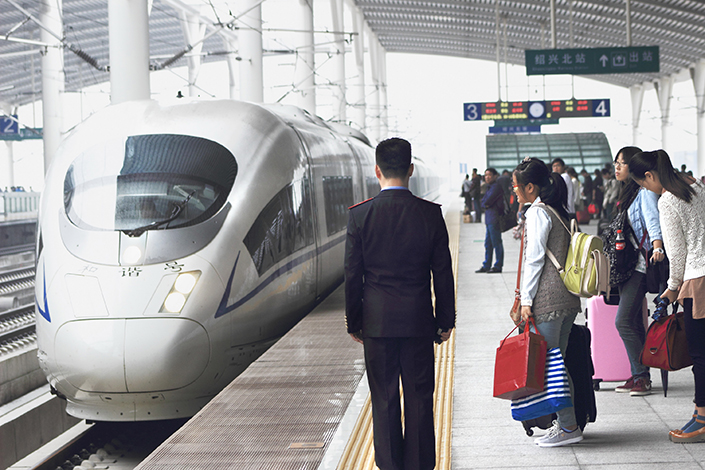 A planned 269-kilometer (167-mile) railway line in Zhejiang province will link the provincial capital of Hangzhou with the city of Shaoxing. Above, travelers wait for the high-speed train at the Shaoxing north station in Zhejiang province in October 2013. Photo: Visual China

Parties signed an investment agreement for the public-private partnership (PPP) rail project in Zhejiang province on Monday. The deal was the first of its kind in the railway sector to have private investors hold a controlling state.

The 269-kilometer (167-mile) railway line, which will have a target speed of 350 kph, will link the provincial capital of Hangzhou with the city of Shaoxing. The line will end in the city of Taizhou in the south of the province.

The total cost of the project will be 40.9 billion yuan ($6.27 billion). A consortium of eight private companies led by Fosun will take a controlling stake of 51% in the project. With a 15% stake, China Railway Corp. will be the third-biggest shareholder. The Zhejiang government will hold the remaining 34%.

Construction of the rail line, due to fully open later this year, will take up to four years. It will be transferred to the Zhejiang government at no cost after the 30-year period of joint operation under a so-called build-operate-transfer cooperation model.

To allow investment in railway construction to continue to grow while limiting local government debt, Beijing is counting on attracting private companies to numerous PPPs like the one in Zhejiang.

The project is one of the eight privately invested railway projects that won approval from the National Development and Reform Commission, China’s top economic planner.

But because most nonstate actors tend to favor projects with higher cash returns, it remains unclear whether there is a strong business model for private companies involved in these kinds of projects.