By Mo Yelin and Lu Bingyang 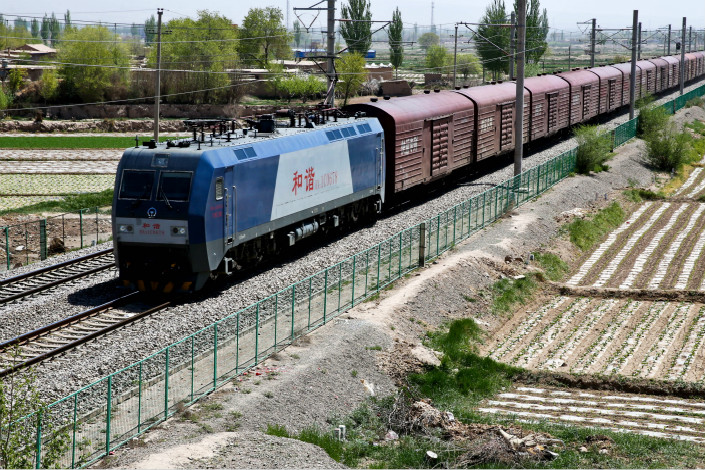 A freight train passes through Zhangye, Gansu province, on May 5, 2017. China’s rail operator, CRC, posted its best performance ever in the first six months of 2017. Photo: Visual China

China’s rail operator posted its best performance ever in the first half of 2017 as the company tried to shed its state-run legacy and become more commercially oriented.

China Railway Corp. (CRC) recorded the smallest net loss since the company took its current form back in 2013. CRC’s net loss narrowed to 2.97 billion yuan ($455 million) during the first half of 2017, a 59.31% decrease from the same period last year, according to CRC’s latest report.

In addition, the company’s total revenue stayed at 469.9 billion yuan, up 12.9% from the same period last year.

CRC has also offered transport services for higher value-added goods, such as apparel and electronics.

For the first half of 2017, the company’s freight income totaled 129.3 billion yuan, edging closer to CRC’s 153.7-billion-yuan passenger business.

The firm’s freight income fell behind passenger revenue for the first time in 2015, and the gap grew last year to 64 billion yuan.

CRC’s rebound comes amid similar improvements from other freight haulers as the highly cyclical industry emerges from several years of downturn. For the first seven months of 2017, rail freight volume reached 1.69 billion tons, up 15.1% from a year earlier.

Still, the company is saddled with 4.77 trillion yuan in debt as of June 30, with little chance of repaying it any time soon. To boost revenue, the CRC has also been focusing on other areas such as advertising and real estate development.