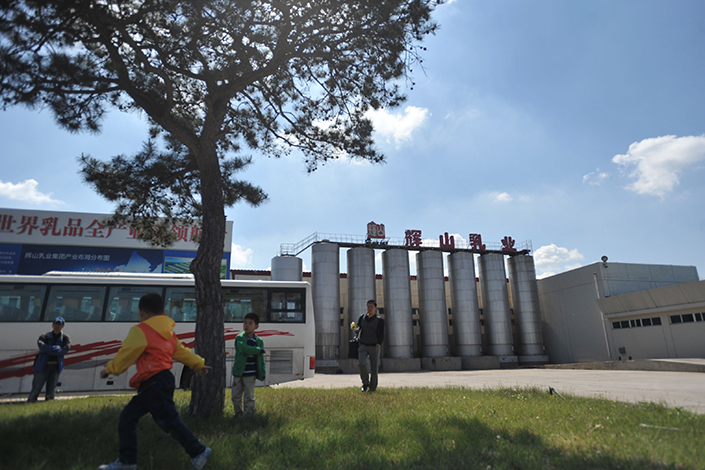 China Huishan Dairy is facing a demand from HSBC Holdings PLC that Huishan immediately repay a $200 million loan that it has defaulted on. Above, children play in front of the Huishan plant in Shenyang, Liaoning province, in May 2014. Photo: IC

China Huishan Dairy, the milk producer buried under a 26.73 billion yuan ($4.09 billion) mountain of debt, is facing more trouble now that one of its bankers is demanding the immediate repayment of a total of $220 million in outstanding loans and unpaid interest.

The country’s biggest dairy farm operator, whose Hong Kong-listed shares have been suspended since March, said it was taking legal advice on the demands made by HSBC Holdings PLC, and that any repayment would need to be considered with its existing debt-restructuring proposals — currently the subject of negotiations with its main creditors in China.

HSBC, which acted as the lead agent for a syndicated loan taken out in 2015, said that because Huishan had defaulted on the loan agreement, it needs to repay by Thursday the outstanding $200 million on the two tranches of the loan — one in U.S. dollars and one in Hong Kong dollars — and about $6.4 million in unpaid interest.

The Hong Kong-based bank is also demanding repayment of $13.7 million owed under a separate banking facility made available to the company in 2014, Huishan said in a statement to the Hong Kong Stock Exchange on Monday.

Huishan, which is based in Shenyang, the capital of Liaoning province in northeast China, has been mired in controversy since December, when the short-selling fund Muddy Waters issued a report questioning its earnings and saying the company was worth next to nothing. On March 24, the milk producer’s shares plunged 85%, the largest one-day percentage drop ever recorded on the Hong Kong Stock Exchange, amid speculation the company wasn’t able to make loan payments. The shares have been suspended since then as the company’s financial troubles deepened, and Ge Kun, the treasurer and wife of Chairman Yang Kai, disappeared.

The dairy producer started work on a debt restructuring plan in July, and in August issued a proposal that involved repaying creditors 14% to 20% of the debts they were owed. They would also be given shares in a new company that combined Huishan’s current assets and businesses with other affiliated companies personally controlled by Yang. Yang and the management team would get a 15% stake in the new company contingent on their finding a so-called white knight investor.

However, sources have told Caixin that some creditors are fighting the plan, including Bank of China, which is owed 4 billion yuan. They said they will reject any restructuring proposal that gives Yang control of Huishan, citing a breakdown in trust in the chairman.

According to data collected by Huishan’s creditors’ committee, Bank of China is the dairy company’s largest onshore creditor. Ping An Bank is Huishan’s largest offshore creditor, having extended 2.4 billion yuan in loans.