WeWork Wants UrWork Out of Its Space 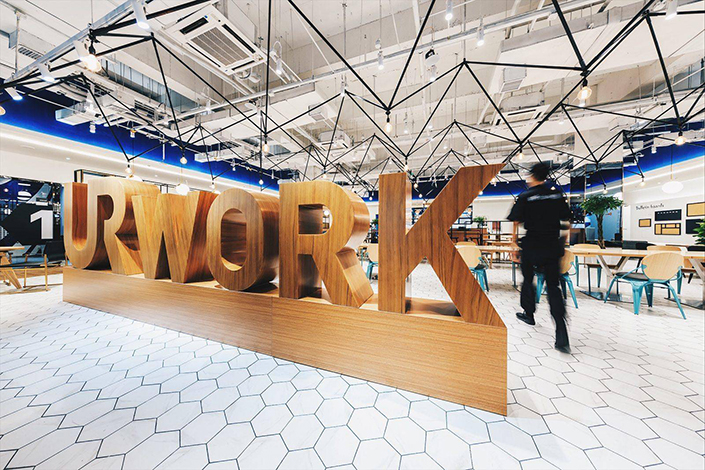 WeWork Companies Inc. said in a case filing to U.S. federal court on Tuesday that rival UrWork has a “confusingly similar name” that “will deceive potential customers into believing that UrWork’s services come from, are affiliated with or are sponsored by WeWork.” Above, a UrWork shared-office space is seen in the Jiuxianqiao area of Beijing on July 20. Photo: UrWork

Shared-office provider WeWork has filed a trademark lawsuit in the U.S. against Chinese rival UrWork, just as both companies are muscling in on each other’s space.

WeWork Companies Inc. said in a case filing to federal court in New York City on Tuesday that Beijing-based UrWork, which recently announced its entrance to the U.S. market, has a “confusingly similar name” that “will deceive potential customers into believing that UrWork’s services come from, are affiliated with or are sponsored by WeWork.”

The U.S. firm also asserted that UrWork’s logo, its office style and operations are all “in a manner that is derivative of WeWork’s model.”

The lawsuit follows another legal action that WeWork took against the Chinese company in London, in which the U.S. firm accused UrWork of “passing off” — a tactic in which one business misrepresents its services as being the product of another, Bloomberg reported.

There is no trademark under the name of “UrWork” or “Ur Work” registered with the U.S. Patent and Trademark Office. In the U.K., the status of all five trademarks registered by UrWork (Beijing) Venture Capital Co. Ltd. has been “opposed.” WeWork was a major opponent.

UrWork did not immediately reply to Caixin’s request for comment.

WeWork’s logo is the word “we” in dark gray within a ring of the same color, while UrWork is represented by a white “UR” embedded in an orange circle.

In its complaint, WeWork said that the logos are similar in that they both use two-letter pronoun prefixes within a standalone circle.

UrWork, valued at about 9 billion yuan ($1.38 billion), launched its first U.S. location in Los Angeles earlier this month. At the same time, WeWork has operated in China since 2015 and has received $500 million in new investment funds to accelerate its China rollout.

UrWork is set to open a location in November in New York City, which is WeWork’s home market. In its complaint, the U.S. company demanded that UrWork halt its New York launch “under the unlawfully and confusingly similar name.”

WeWork’s lawsuit targeted three UrWork companies, one in Beijing and two in New York, along with Serendipity Labs Inc. In July, Serendipity Labs joined forces with UrWork to help with the Chinese company’s U.S. expansion.