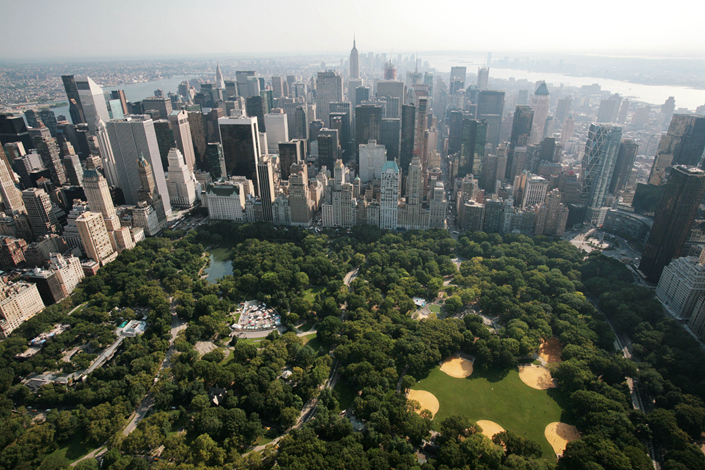 China’s outbound direct investment fell 41.8% year-on-year over the first eight months of 2017 in response to a government crackdown on overseas acquisitions, especially in real estate. Anbang Insurance Group drew government scrutiny for its shopping spree over the last three years, which included the purchase of the Waldorf Astoria hotel in New York, located near the city's Central Park (above). Photo: IC

(Beijing) — Chinese companies have made no investments overseas in the property, sports or entertainment sectors this year, amid government curbs on “irrational” spending, official data show.

No new deals were completed in the first eight months of this year, Gao Feng, a spokesman for the Ministry of Commerce, said at a regular briefing on Thursday. “Irrational outward investment was contained further,” Gao said.

The crackdown, which started late last year, hit overall outbound direct investment (ODI) in nonfinancial sectors, contributing to a 41.8% year-on-year slump over the period to $68.7 billion, the ministry’s figures showed, narrowing from a 44.3% drop in the first seven months. The ministry does not provide figures for monthly changes in ODI.

China’s nonfinancial outbound investment has plummeted this year after a clampdown by the government on an overseas shopping spree that led to a 44.1% jump in ODI, which hit a record $170.1 billion in 2016, outpacing inbound foreign investment for the first time on record. The deals, which included retail giant Suning Commerce Group’s 270-million euro ($322 million) acquisition of football club Inter Milan, contributed to record net capital outflows last year of $725 billion, according to estimates from the Institute of International Finance, a global financial industry association.

The outflows, which helped push the yuan 6.5% weaker against the dollar in 2016, unnerved regulators and prompted the government late last year to step up scrutiny of Chinese companies’ overseas mergers and acquisitions. Policymakers were also concerned about debt risks linked to such deals because they were often funded by credit from both within and outside the formal banking system.

In December, four government agencies, including the State Administration of Foreign Exchange, indicated they would strengthen measures to prevent risks from overseas investments. They warned of “irrational outbound investment trends” in some sectors, including property, hotels, cinemas, entertainment and sports clubs, which are not seen as furthering China’s goals of upgrading its industrial sector and improving technological innovation. The State Council, China’s cabinet, released rules last month that put the official government seal on those measures.

In July, conglomerate HNA Group Co. Ltd. decided not to pursue a $416-million tie-up with New York-listed satellite connectivity service provider Global Eagle Entertainment Inc. The pullout came after the deal failed to get regulatory clearance from the U.S. and amid media reports that several Chinese banks stopped extending new loans to HNA due to regulators’ demands that it assess its credit-risk exposure to a list of firms that had binged on overseas acquisitions.

Nevertheless, the government has remained supportive of investment in other sectors that it sees as beneficial to the country’s campaign to move up the industrial value-added chain, acquire technology, and grow the services sector.

Inbound foreign direct invest (FDI) in nonfinancial sectors appeared to be recovering, ministry data showed. In August, investment rose by 9.1% year-on-year to 62.5 billion yuan ($9.5 billion), the biggest increase this year, although the cumulative figure for the first eight months showed an annual decline of 0.2% to 547.9 billion yuan.