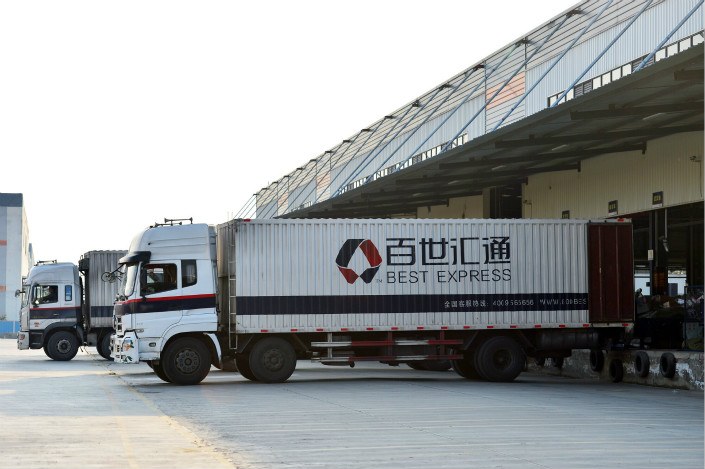 Logistics company Best Inc. initially aimed to raise as much as $1 billion in its New York IPO, but later reduced that target to a more modest $570 million. Photo: Visual China

Logistics provider Best Inc. raised less than half of its original target for a New York IPO and said that backer Alibaba Group Holding Ltd. had volunteered to buy a sizable portion of the offering, in signs the listing suffered from weak demand.

Best had originally aimed to raise up to $1 billion through its New York listing, according to a filing to the U.S. securities regulator last month. But it cut the maximum amount this week to $570 million, saying it planned to issue of up to 51.75 million American Depositary Shares (ADSs).

In the process of slashing the target, Best also lowered the ADS price range for the IPO to between $10 and $11, down from a previously announced $13 to $15. It also said that Alibaba, which already owns 23% of the company, had said it would be interested in buying up to $150 million worth of shares from the IPO.

It did not provide any explanation for the lowered fundraising target, nor the sharply reduced price range. But such moves often indicate weak demand for an offering.

The company said it ultimately priced the shares at the $10 bottom of their range, raising a total of $450 million, according to an announcement on Wednesday. It said the shares would begin trading under the ticker symbol BSTI on the New York Stock Exchange during the Wednesday trading day in New York.

The listing may be following in the footsteps of China Rapid Finance Ltd., another money-losing Chinese company that listed in New York in April, said Ryan Roberts, an analyst at MCM Partners. Those shares initially climbed, but have moved steadily downward and now trade just above their IPO price of $6.

“It seems to suggest that appetite is less than companies would have hoped for,” Roberts said. “China Rapid Finance did set a bit of a sour tone, and it looks like Best is being viewed in a somewhat similar light.”