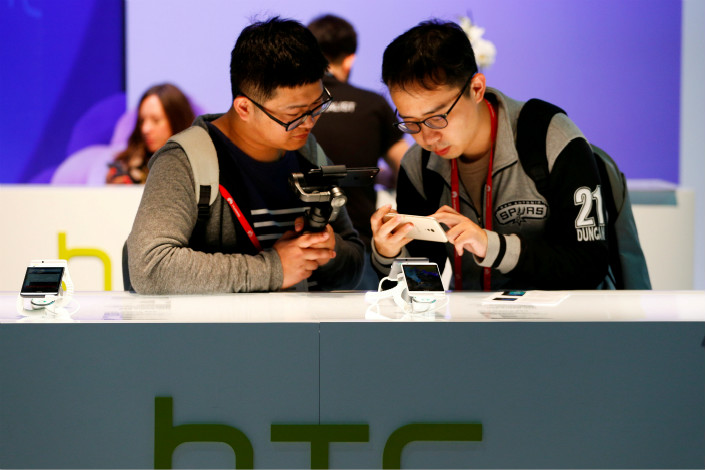 Google Inc. said its $1.1 billion investment in HTC Corp. is part of a longer-term plan for development of the Pixel brand. Above, attendees of the Mobile World Congress in Barcelona, Spain, examine the new HTC U Ultra on March 1. Photo: Visual China

Google will pay $1.1 billion for assets related to its longtime collaboration with smartphone manufacturing partner HTC Corp., the pair said on Thursday, providing a needed boost to the struggling Taiwan company.

Google and HTC have a long-running relationship in smartphones, an area that Google has tried to build up originally through its Nexus brand and more recently through its higher-end Pixel line. HTC manufactured the earliest Nexus One model, which came out in 2010, and is also a launch partner for Google’s higher-end Pixel line, announced last year.

“That’s why we’ve signed an agreement with HTC … that will fuel even more product innovation in the years ahead,” Rick Osterloh, Google’s senior vice president for hardware, said in a blog post discussing the investment. “With this agreement, a team of HTC talent will join Google as part of the hardware organization. These future fellow Googlers are amazing folks we’ve already been working with closely on the Pixel smartphone line, and we're excited to see what we can do together as one team.”

He added that the deal also includes a non-exclusive license for HTC intellectual property.

HTC provided the $1.1 billion figure for the value of the deal, confirming the tie-up will see its current Pixel team and other related assets move over to Google as part of the arrangement. It added the pair will continue to collaborate in accordance with a previously signed agreement.

HTC shares were up 2.5% in early trade in Taipei on Thursday. But they have lost about three-quarters of their value from levels as recently as four years ago, when the company was considered a major global player and innovator in the smartphone realm.

Following those highs, HTC made a series of stumbles by failing to create popular models in the fast-moving market. Its revenue fell 14% to NT$16.1 billion ($530 million) in its latest reporting quarter, while its net loss narrowed 36% to about NT$2 billion.

Osterloh pointed out that the pair’s collaboration spans nearly a decade, since HTC became the first company to roll out a model using Google’s Android operating system with its 2008 launch of the HTC Dream, also known as the T-Mobile G1. Since then, Android has gone on to become a dominant force in smartphones, powering the big majority of the world’s models.

“It’s still early days for Google’s hardware business,” Osterloh wrote. “HTC has been a longtime partner and has created some of the most beautiful, high-end devices on the market. We can't wait to welcome members of the HTC team to join us on this journey.”