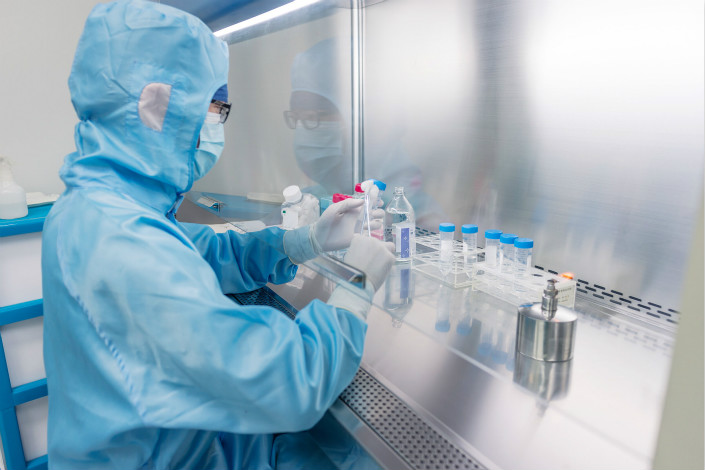 Zai Lab Ltd.'s strong debut in New York trading was a strong vote of confidence for a 3-year-old firm with no sales. Photo: Visual China

The opening was a strong note of confidence for a firm with only three years of history and no sales, giving Zai a $1.4 billion market value at the end of its first trading day on Wednesday on the Nasdaq. The stock ended at $27.93, after pricing at $18 per American Depositary Share (ADS). Zai raised $150 million through the listing.

In its prospectus, Zai describes itself as a “clinical stage biopharmaceutical company with a limited operating history,” noting that its industry is highly speculative.

“To date, we have financed our activities primarily through private placements,” it said. “We have not generated any revenue from product sales to date, and we continue to incur significant development and other expenses related to our ongoing operations. As a result, we are not profitable and have incurred losses in each period since our inception in 2014.”

But those gains came only after the company slashed its original fundraising target by more than half and priced the deal at the bottom of its range, after signs of tepid demand. Like Zai, Best Inc. is also losing money.

Zai said its research and development costs more than doubled in the first six months of this year to $20.9 million, causing its net loss to widen by a similar amount to $24.4 million.

Optimism about Zai’s prospects comes as China holds out big plans for its drug sector, and especially the biopharmaceutical sector that is quickly gaining ground on traditional chemical-based medicines. In late 2011, the Ministry of Science and Technology projected the biology industry will grow 15% annually through 2015. In January this year, China’s National Development and Reform Commission (NDRC) forecast that the output of China’s drug companies will hit 600 billion yuan ($91 billion) by the end of the decade.

Following the political winds, venture capital funding in Chinese biopharma companies from 2012 to 2016 surged more than sixteenfold to more than $1 billion, according to BioCentury’s online intelligence service BCIQ.