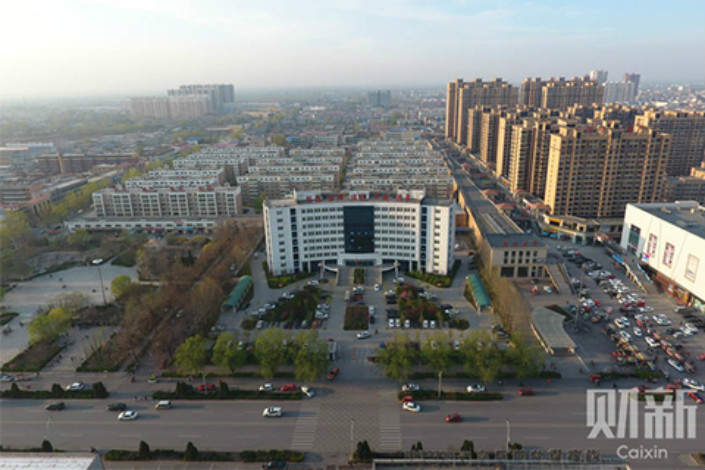 The Xiongan New Area's local authority plans to boost the construction of affordable rental properties for newcomers and establish a point-based system to determine which migrants will be qualified to purchase these homes. Above, Rongcheng county is one of three counties in Hebei province that comprise Xiongan. Photo: Chen Weixi/Caixin

(Beijing) — As China’s national government tries to drive forward the development of the Xiongan New Area economic zone, it has moved to pre-emptively solve a problem plaguing the residents of China’s biggest cities: the cost of housing.

The Xiongan local authority plans to boost the construction of affordable rental properties for newcomers, according to an article published on the area’s official WeChat account Tuesday. The authority will also establish a point-based system supported by big-data technology to determine which migrants will be qualified to purchase these homes.

The article said that the points will be allocated, at least in part, by the length of time that out-of-towners live and work in Xiongan and the contributions they make to the area. Those with enough points will be offered opportunities to purchase the homes they rent, but they will be prevented from putting these properties on the market for a period of time.

The article did not elaborate on how contributions will be judged, how exactly points will be allocated, for how long people will be prevented from selling their homes, or what kind of opportunities the residents will be given.

The Xiongan New Area, in central Hebei province, became China’s 19th national economic zone when it was formally founded by the central government in April. The significance of Xiongan lies in its proximity to Beijing, as the capital city is trying to find cures for what it has dubbed “big-city diseases” such as traffic congestion and overpopulation.

The Beijing News cited in August a Chinese Academy of Social Sciences report as saying that Xiongan will be home to about 1 million people in the initial stage, a figure which will grow to no more than 5 million in the long term.

Xiongan, which is about 130 kilometers (80 miles) to the south of Beijing and spans three counties, was chosen because its location will allow it to take on some of Beijing’s “burdens.” Several top Chinese schools have announced plans to move a portion of their facilities to Xiongan.

However, not everything has gone as planned. For instance, local housing prices shot up rapidly on the heels of the announcement of the new area to the point that local authorities had to roll out a flurry of administrative measures to stem housing speculation.

Xiongan will embody the concept that “homes are for living in, not speculating on” — a phrase that originated at a high-level economic conference attended by top Chinese leaders in December — the WeChat article said, citing an unnamed member of the area’s management committee.

The article also said that Xiongan will ditch a common local government practice known as “land revenue,” which many provincial and county-level authorities have long used to accelerate urban development. In this practice, governments buy tracts of land owned by farmers at a low price and then sell them to real estate developers for higher prices. This method has been a ubiquitous feature of China’s rapid urbanization for several years.

Many have raised doubts over Xiongan’s claim that it will not use real estate revenue to support local development and have wondered where the funds necessary to construct the ambitious project will come from, the article read.

In response, the committee member was quoted as saying that the Xiongan New Area’s fiscal revenue will be derived from taxes and added-value land revenue, which in general is generated as land changes hands.

From 1999 to 2015, land transfer revenue grew at an average annualized rate of 29.8% in China, compared with a gross domestic product average annual growth rate of 13.4% over the same period, according to a study by Nanjing Agricultural University last year.