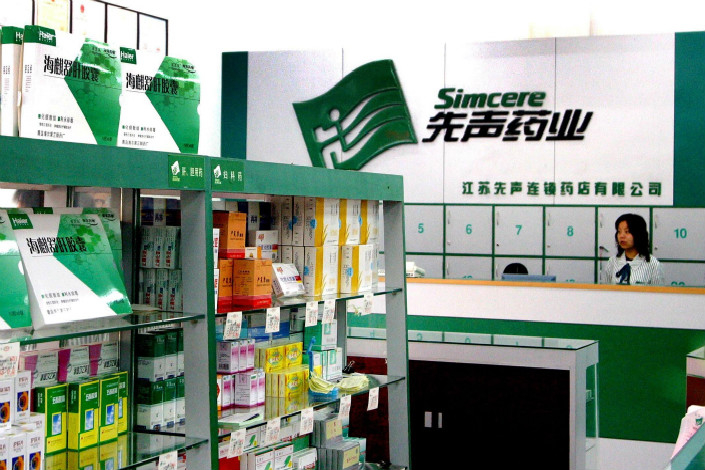 The new deal between Amgen Inc. and Simcere Pharmaceuntical Group comes as China develops increasingly ambitious plans for its drug sector, especially in biopharmaceuticals. Above, Simcere products are displayed at a store in Nanjing. Photo: Visual China

All four agents are “biosimilars,” or nearly identical to existing biologic medical products that have been greenlighted by a drug authority, and thus have no clinically meaningful differences in terms of safety and effectiveness from the existing medications.

The companies did not specify what the four products were, but in a joint statement said they “are a part of Amgen’s existing biosimilars portfolio,” and would be used in the treatment of inflammation and cancer.

Financial details also were not disclosed, but Amgen “will remain responsible for the co-development, marketing approval applications and manufacturing of the biosimilars,” while Simcere will focus on distribution and commercialization in China, the statement said.

Amgen has created several pioneering biotechnological agents for the treatment of diseases such as cancer, stroke and diabetes. Its newly developed drug Mvasi — based on Avastin, a medication from F. Hoffman-La Roche AG’s Genentech Inc. — is the first anti-cancer biosimilar ever approved by the U.S. Food and Drug Administration.

The Amgen-Simcere deal comes as China develops increasingly ambitious plans for its drug sector, especially in biopharmaceuticals, an area that is gaining ground on traditional chemically synthesized medicines.

The China Food and Drug Administration (CFDA) has implemented reforms on drug approvals, encouraging research and development of innovative, higher-quality medicines, according to Simcere Chief Scientific Officer Mu Hua. In June, the CFDA became a member of the International Council for Harmonization of Technical Requirements for Pharmaceuticals for Human Use, which allows China to share technical standards with developed regions like the U.S. and Europe.

In January, the country’s national economic planning body forecast that China’s biopharma output will hit the equivalent of 600 billion yuan ($90.5 billion) by the end of 2020.

Shares of Nasdaq-listed Amgen declined 0.37% to $185.6 per share on Tuesday. Simcere was among the first Chinese drugmakers to list in New York, but was privatized in 2013 by a consortium that included Hony Capital and a subsidiary of Shanghai Fosun Pharmaceutical Group Co. Ltd.