By Yang Qiaoling and Aries Poon 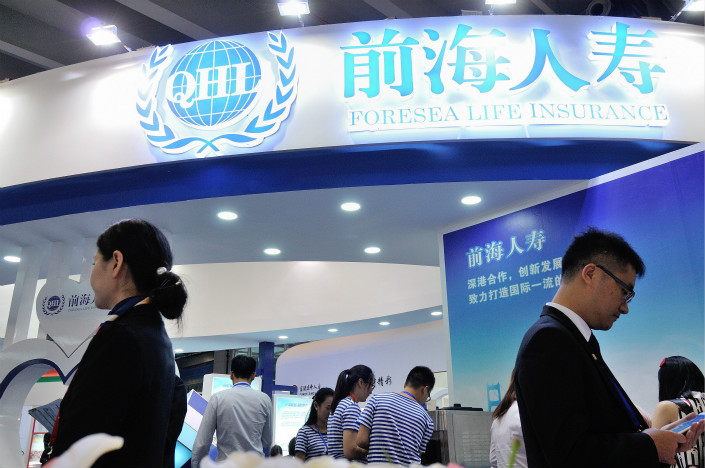 The regulator's assessment didn't include three firms which it is currently investigating, including Foresea Life Insurance. Foresea has been banned from selling high-risk "universal life insurance" products since December. Photo: Visual China

Corporate governance at Chinese insurers has declined over the past year and a half, albeit not alarmingly, a regulatory audit finds.

The average “mark” of all Chinese insurers was 83.74, lower than the 85.80 they received in the 2015 review, it said. Foreign insurers’ average score was also higher than Chinese ones, the CIRC added, without disclosing their mark.

Reining in the fast-growing insurance industry is one of the CIRC’s priorities. It became an urgent, if not political, task in recent years when some insurers aggressively purchased overseas and domestic assets, raised funds outside the formal banking system through high-risk products that were masked as “universal life insurance,” and put investors and the regulators in the dark by having murky ownership structures and conducting connected transactions without full disclosure.

As former CIRC head Xiang Junbo, an advocate of a more liberal market, was recently expelled from the ruling party after a corruption investigation, the industry is awaiting whether liberalisation measures rolled out under Xiang’s tenure will be dialled back.

The latest industry assessment included new areas of inquiry, such as clarity on ownership structures and connected transactions, as well as other internal controls, the regulator said. Other evaluation metrics were the same as in the last review in 2015, such as the autonomy of independent directors, effectiveness of internal auditors, competency of board of directors and internal control over salaries.

Caixin previously reported in November 2016 that June Life planned to sell itself to aluminum maker China Zhongwang Holdings Ltd. — a deal that still hasn’t been closed — after two failed sale attempts. The regulator had also found that the controlling shareholder owned too much of the insurer, as well as deciding that the firm did not have enough control over risk generated by its universal life policies.

Huaxia Life was ordered by the CIRC last year to stop selling policies online because they were failing to properly verify the information of policyholders.

It is not known why Sino-Conflux and Chang An Property were rated poorly in the assessment.

The CIRC also found improper behaviour across the industry. It said some unnamed insurers were found to be falsifying their shareholders’ funding sources, or leveraging the same assets to apply for multiple loans.

Foresea Life, the insurance arm of property conglomerate Baoneng Group that made headlines for its failed leveraged buyout of real estate developer Vanke Co. Ltd. from 2015 to 2017, has been banned from selling universal life policies since December. The insurer said in August it was still in a negative cash flow position due to plunging sales, and that it might not be able to pay policyholders.

Funde’s aggressive expansion into real estate, energy and infrastructure also raised the regulator’s eyebrow. Chairman Zhang Jun has been detained since February to assist with a corruption investigation. His detention is related to an inquiry into Liu Zhigeng, the vice governor of Guangdong province currently under investigation on suspicion of corruption, a person familiar with the situation said earlier.

The CIRC has banned Evergrande Life from buying stocks for one year in February, following what the regulator found was “an irregular use of insurance premiums” in stock investing last year. The regulator also lowered the insurer’s maximum percentage of permitted equity holdings to 20% of assets from 30%.

The owner of the Waldorf Astoria New York landmark hotel, Anbang saw the number of its shareholders increase from seven to 39, while its registered capital ballooned by September 2014 to 61.9 billion yuan, or $10 billion at the time, according to a previous article published by Caixin. Behind the swelling capital are a series of complicated transactions that form a maze of capital flow involving more than 100 companies, all linked to the company’s then-chairman, Wu Xiaohui, who stepped down for undisclosed reasons.