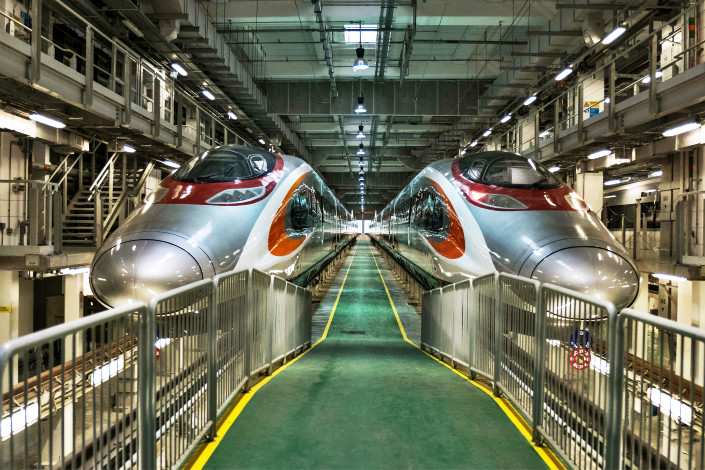 The Hong Kong section of the 140-kilometer Guangzhou-Shenzhen-Hong Kong Express Rail Link was 94.3% complete as of June 30, a new report says. Above, two trains for the new route are seen in Hong Kong on Aug. 2. Photo: Visual China

Progress on the Hong Kong section of its planned link to the mainland’s high-speed rail system was ahead of schedule during the second quarter of 2017, according to a document released by the Hong Kong government.

The Hong Kong section of the 140-kilometer (87-mile) Guangzhou-Shenzhen-Hong Kong Express Rail Link was 94.3% complete as of June 30, a report by the city’s Legislative Council said. The city had previously planned to complete 88.9% of the project by that date.

The rail link, which will cut trips between Hong Kong and the Chinese mainland to under 15 minutes, is expected to begin running in the third quarter of 2018.

Most major construction work on the rail link has progressed faster than expected, the report said, with the exception of work on the West Kowloon Terminus, the planned city-center station. Parts of the station, including its external wall and entrance building, still require “continual and close monitoring,” the report said.

All nine high-speed trains ordered by the special administrative region’s MTR Corp. Ltd. and built by CRRC Qingdao Sifang Co. Ltd. have arrived in Hong Kong from the northern Chinese seaside city of Qingdao, the report added. This means Hong Kong is now connected with the 20,000-kilometer national high-speed rail network, it said.

Hong Kong Chief Executive Carrie Lam unveiled the specially designed trains in July. The Guangzhou-Shenzhen-Hong Kong Express Rail Link, when complete, will be able to take passengers from West Kowloon to the Shenzhen Futian station in 14 minutes, and the Guangzhou South station in 48 minutes.

At the moment, it takes over 30 minutes to travel by MTR trains from Hong Kong’s Kowloon Tong station — much farther north than the planned West Kowloon Terminus — to the city’s border with Shenzhen.

The 26-kilometer Hong Kong section of the high-speed railway is part of a wider push to integrate the Pearl River Delta area. A “co-location” plan, announced by the Hong Kong government on July 25, will combine mainland and Hong Kong immigration checkpoints into a single facility in the West Kowloon Terminus.

Additionally, a three-lane bridge between Hong Kong, Macau and Zhuhai, north of Macau in Guangdong province, is slated to open in 2020. In late August, the Hong Kong Airport Authority announced that it will build a 360-meter bridge from Hong Kong International Airport to a customs post on the cross-border bridge, the South China Morning Post reported.