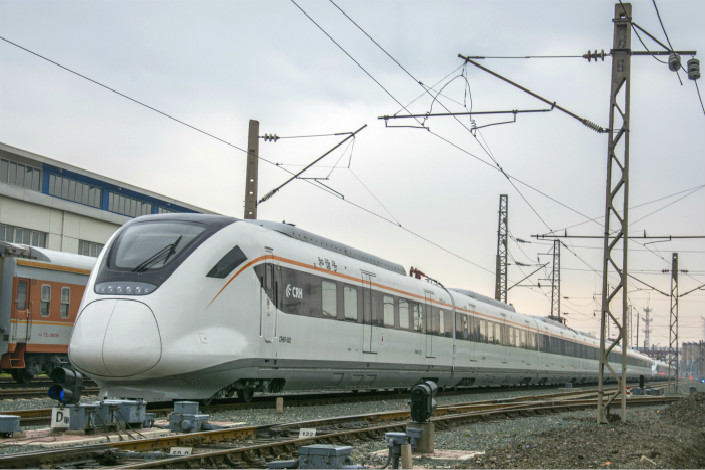 Before their merger, Alstom and Siemens saw new orders slide 6% and 22%, respectively, over the last fiscal year. Meanwhile, CRRC reported its train supply orders from overseas were up 40%. Photo: Visual China

Is the mega-merger between European rail giants Alstom of France and Siemens AG of Germany targeting their Chinese rival CRRC? Alstom’s answer to Caixin is yes, and no.

Siemens, which makes transit vehicles and rail automation systems, and Alstom, which makes the high-speed TGV train, announced their merger in the shadow of a powerful threat in the form of CRRC Corp. Ltd.

A person close to Alstom told Caixin that Alstom will not only compete, but also cooperate with CRRC after the merger, in both China and international markets. The kind of cooperation was not immediately clear.

Before the merger, Alstom and Siemens saw slides in new orders, which fell 6% and 22%, respectively, in the last fiscal year. In contrast, CRRC reported a 40% growth in train supply orders from overseas.

“The global marketplace has changed significantly over the last few years. A dominant player in Asia has changed global market dynamics and digitalization will impact the future of mobility,” said Siemens President and CEO Joe Kaeser upon announcing the merger.

The deal has enabled the two companies to expand in terms of activities and geography. The new venture, named “Siemens Alstom,” will access markets including the “Middle East and Africa, India, and Middle and South America where Alstom is present, and China, United States and Russia where Siemens is present,” both said in a joint statement.

A person from CRRC told Caixin that regardless of whether the new Siemens Alstom aims to counter CRRC, the Chinese company will face headwinds in expanding overseas.

In the first eight months of the 2017, CRRC had $3 billion in overseas orders, leaving it far short of its annual target of $9 billion, sources told Caixin. It lost some major deals, including a $3.2 billion subway supply contract to New York City.

CRRC said in a financial report that “global trade protectionism and uncertainties in the international market have both increased, thus risks of CRRC going abroad have risen.”

Siemens and Alstom’s decision to merge their rail operations is about business and not politics, according to the companies’ CEOs, CNBC reported.

The Alstom employee told Caixin that both French and German authorities support the deal. The transaction is pending regulatory approvals, including foreign investment clearance and antitrust checks, which are expected to be done by the end of 2018.

Shares of Shanghai-listed CRRC rose 0.1% on Friday, while Alstom and Siemens shares rose 2.37% and 0.08%, respectively, on Thursday.