Rich and Poor Are Neighbors — but Divided by Walls 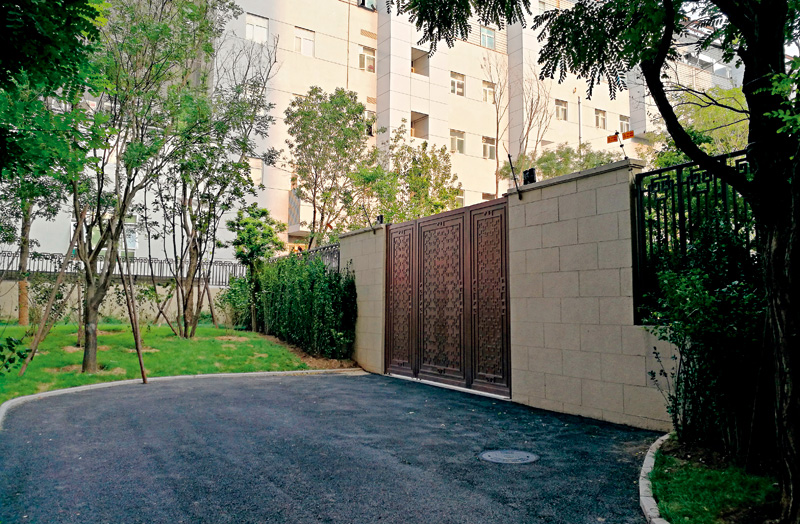 On one side of the gated wall (pictured) dividing a residential compound in Beijing, homes were sold to low-income families for 21,000 yuan ($3,150) per square meter. On the other side, residents spent between 100,000 and 160,000 yuan a square meter for an area with far more lush green space. Photo: Huang Ziyi

(Beijing) — The chasm in quality and space between two groups of homes in some mixed residential compounds in China is being described as “Africa versus Europe.”

On one side of these “mixed communities” are ordinary buildings that the government requires developers to build as public rental houses or affordable homes for low-income families in return for land for development. On the other side are commercially developed villas and condominiums for the rich, which are often set off by a towering wall or a less-conspicuous green barrier.

Such mixed communities, tried out by some countries, aim to bridge the social divide by having rich and poor share a neighborhood.

City planners in China have embraced the concept in recent years to grapple with rising demand from low-income families and young migrants recruited via government talent programs for affordable homes amid soaring housing prices in large cities such as Beijing and the southern city of Shenzhen.

But some bemoan the physical barriers and their symbolism in a socialist country. It has become a flashpoint for homeowners on both sides.

On the other side of the wall

In Fengtai district in southern Beijing, residents have locked horns over a gated wall that separates those living in a cluster of affordable houses known as Yupu Home Garden from those in the upscale homes in Xichen Yuanzhu.

Yupu Home Garden, which is more crowded with far less green space than its wealthier neighbor, was sold to low-income families for 21,000 yuan ($3,150) per square meter when units went on sale in March.

The only public space on the Yupu side is next to an area for the neighborhood’s sewage system and gas pipelines, which has 38 manholes and an odor.

Residents who moved into the Yupu Home Garden in March have been petitioning regulators and the company that manages buildings on both sides to unlock the gate and even demolish the wall so they can enjoy the lush and leafy garden and parking spaces of their wealthy neighbors.

They argue they should be able to use the space and facilities because it was all built as one complex by the same developers. The removal of the gated wall is also a matter of principle, several homeowners at Yupu Home Garden told Caixin.

However, the wealthy homeowners adamantly oppose the idea, arguing that if the wall falls, their quality of life will be compromised, according to Zhang Tao, a resident of the upscale side.

“I couldn’t bear the thought of living with them as one community, and on top of that, demolition of the wall would lead to a big decline in our quality of life, and we could stand to lose financially, too,” he said.

Zhang said prices of their homes might plummet by 30% if the wall is taken down.

Similar confrontation erupted over a broken concrete wall dividing homes within one residential area known as Jinyu Banshan in the Longgang district in Shenzhen.

Residents in the eight upscale high-rises along a spacious green garden have been demanding that the wall be fixed to stop residents on the other side from accessing the garden and parking spaces on their side.

Tenants living in public rental homes on the other side of the shallow wall campaigned for the wall to be torn down because they believe they are entitled to facilities on both sides.

Those living in public rental houses pay about 1,000 yuan a month in rent and management fees for a flat of 50 square meters.

An 89-square-meter home on the other side cost 4.5 million yuan, or more than 50,000 yuan per square meter of floor space, according to Zhou Yue, a 33-year old office worker, who bought a home a few years ago.

She said she shares the sentiment with the 800-plus homeowners that it is unreasonable for them to share facilities with tenants in the rental homes on the other side who paid so little.

“Like a breach in a dam, the broken wall must be fixed to protect our privilege,” she said.

Jinyu Banshan was also built by the same developer, Xinyi Real Estate, and is managed by a subsidiary of the company.

A manager at the company told Caixin that they have no plans to fix the broken wall.

Amid the rising outcry over pricey homes in China, many local governments in recent years have introduced new land-use policies requiring developers to use a portion of the land they bought to build affordable houses or public rental homes.

Problems arise because regulators do not specify how such mixed projects are to be developed or whether a break or barrier is allowed between the two types of homes developed on the same lot. Separation is common, taking the form of an upright wall or a green barrier, according to several real estate company executives.

Both developers behind Jinyu Banshan in Shenzhen and the compound in Beijing’s Fengtai district refused to reveal the ratio of land used for the two sides.

But developers behind the Cuiyue Bay complex in the southern city of Guangzhou agreed to allocate 40% of land they purchased in a government-sanctioned auction in 2011 to build cheaper homes for low-income families and new recruits under government talent programs.

To enlist more support from developers, many local government-backed auctioneers have tended to grant land to developers who promise to preserve the highest ratio of land for affordable housing or public rental houses.

A recent blueprint from a real-estate firm in Guangzhou, leaked onto the internet, shows that the unidentified developer planning to build 41 villa homes agreed to build 730 homes for low-income families as a pre-requisite for the plot of land. However Caixin could not independently verify the document’s authenticity.

The higher the ratio that developers promise, the higher the standard in design and finishing they have to follow for the upscale homes in order to make more money to fund development of cheaper houses, said an executive at a major property firm in Shenzhen.

“Such barriers are justifiable because home prices on both sides vary sharply, and people pay for what they get,” said one executive who asked not to be named.

As the feud between two groups of homeowners at the residential complex in Beijing’s Fengtai district continues, the Beijing Municipal Commission of Housing and Urban-Rural Development issued an order for developers to remove such barriers by the end of August.

Shenzhen’s Urban Planning, Land and Resources Commission also expressed its opposition via its branch in Longgang district over the segregation, ruling against complaints from wealthy residents in mid-August.

The Shenzhen Housing and Development Bureau, in a directive issued in September, also explicitly banned such barriers.

Such a government clampdown on barriers is unfair for those who pay to live in commercially developed homes because they would feel cheated, said professor Guo Weiqing at Sun Yat-sen University’s School of Government in Guangzhou.

“Tension stemming for this sentiment will haunt such mixed communities, even if governments could take such barriers down,” Guo said.

Tension has resulted from a failure by developers to inform homebuyers of potential differences in quality at the time of purchases, said Wang Jia, head of the urban planning center at Shenzhen’s Urban Planning & Design Institution.

“The amount of green space and parking attached to residential homes is a reflection of the level of quality of life and should be matched by how much residents have paid,” he said.

The developers could not afford to build the homes to the same higher standard and the rich people are unlikely to settle for something inferior to what they have paid for, said Ma Xiulian, an associate professor at the National Academy of Governance who specializes in affordable housing studies.

“If the government wants to support mixed communities that allow people of different social groups to mingle, it must jump in with its share in funding to make up the difference.”