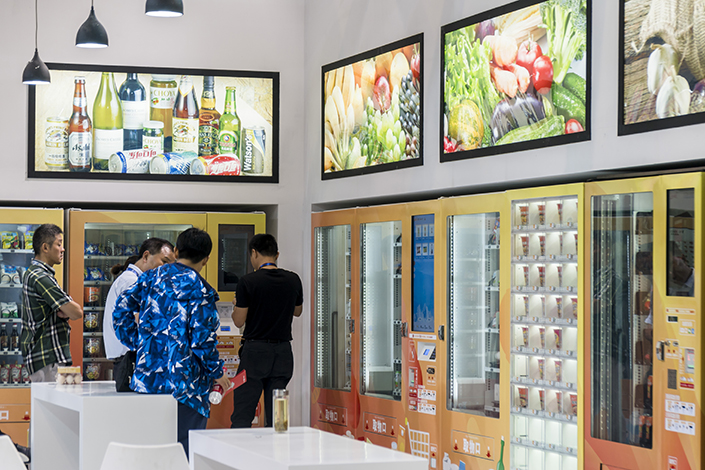 Although the number of traditional convenience stores in China has tripled since 2009, staff costs remain an issue. To lower these costs, the industry is looking at staffless convenience stores. China hosted its first industry expo (pictured) for the automated shops in September in Shanghai. Photo: IC

As retail and e-commerce giants like Alibaba and JD.com have developed their futuristic unmanned convenience stores, the Ministry of Commerce has lately expressed both support and concerns for the nascent industry.

Customers patronize such stores, embedded with technologies including image processing, mobile payment and the internet of things, can help themselves with product selection and payment via smartphones.

As the number of traditional convenience stores in China has exploded — tripling since 2009, according to consultancy Zhiyan — the Ministry of Commerce this year started compiling a quarterly index to track the industry.

The latest index for the second quarter was 73.95, 1.7 points higher than the first quarter, reflecting that the industry is thriving across the board. However, the subindexes for staff costs, land rental and utilities were the lowest. Staffless convenience stores are being looked at to reduce such costs.

“Unmanned convenience stores have been attracting huge investments — another such new industry following bike sharing,” the Ministry of Commerce said when releasing the index.

Ministry spokesperson Gao said that as a nascent industry, unmanned convenience stores will face some challenges because technologies are flawed and regulations are incomplete.

The nascent industry has attracted big companies both in China and abroad. E-commerce giant Amazon sparked market interest when it revealed its concept of Amazon Go stores, which allow shoppers to walk in, pick up goods and leave without interacting with anyone. In addition, Walmart from the U.S., Japanese-owned brands Lawson and 7-Eleven have rolled out similar tests.

In China, a startup, Bingobox, which has been among the earliest to launch automated stores in June 2016, completed an initial financing round this July, raising more than 100 million yuan ($15.15 million). The company is operating nearly 160 stores in 22 cities.

Following the popular concept was e-commerce giant Alibaba, which showcased its staffless Tao Cafe store in the eastern city of Hangzhou over a five-day period in July. Its rival JD.com is preparing to launch such stores soon, Vice President Weng Zhi said in August.

However, in-store theft and technological bugs present obstacles to this emerging business model.

Supermarket chain China Resources Vanguard ran an unmanned pop-up store in the eastern city of Hangzhou, Zhejiang province, for a day in June 2016. It ended up losing 3,000 yuan in goods to shoplifters, the government-backed newspaper Beijing Business Today reported.

French supermarket operator Auchan launched its first unmanned convenience store with BingoBox in Shanghai in May, but suspended operations two months later to upgrade the technology. The shelves and glass exterior couldn’t withstand summer temperatures, and the excessive heat damaged the quality of some of the items in the store. The cooling system is currently being improved, the official China News Service reported.

The Auchan-BingoBox store was closed, and Auchan has since launched another one in the same location with new partner electronics manufacturer Hisense.

Gao said that the Ministry of Commerce will watch the industry closely and publish guidelines to give advice to store operators.