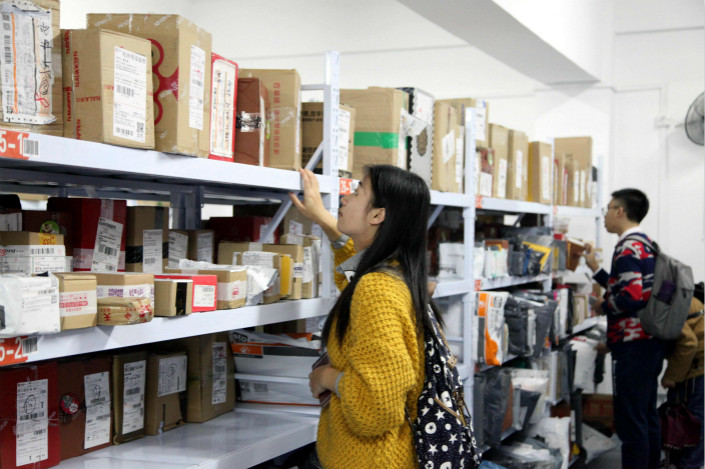 Alibaba's investment in its Cainiao logistics unit is part of its wider "new retailing" model, which has seen it eyeing more brick-and-mortar facilities such as the pictured Cainiao delivery collection point and a planned high-tech shopping mall. Photo: Visual China

E-commerce giant Alibaba on Tuesday announced a plan to take control of and pour 100 billion yuan ($15 billion) into its Cainiao logistics unit, aiming to build up a network that can make rapid deliveries anywhere in the world.

Alibaba Group Holding Ltd. said it would pay 5.3 billion yuan to boost its stake in Cainiao to 51% from a previous 47%. It added the new investment would entitle it to another seat on Cainiao’s board, giving it the right to name four out of seven board members.

Additionally, Alibaba said it would pump another 100 billion yuan into Cainiao over the next five years to continue building up a global network that can make deliveries anywhere in China within 24 hours, and anywhere in the world within 72 hours. Such investments would come in a wide range of areas, including smart warehousing and worldwide logistics services, the company said.

“By enhancing the logistics capabilities within the Alibaba ecosystem and extending our investment in this sector, we are further enabling our ‘new retail’ strategy to bring online and offline retail into one seamless experience for shoppers,” said Alibaba CEO Daniel Zhang. “We will also continue to deepen our collaboration with various logistics partners to achieve this goal.”

As a majority-owned unit, Cainiao will be consolidated into Alibaba’s results after the latest investment closes, which is expected next month.

Unlike rivals like JD.com Inc. and Amazon.com Inc., which generate most of their business by selling products directly to consumers, Alibaba operates large online shopping malls that are populated by thousands of independent third-party merchants. That puts Alibaba at a logistical disadvantage because it relies on its merchant partners to ship goods directly to consumers. By comparison, Amazon and JD can package goods and ship them directly and quickly from their own massive warehouses.

To bridge that gap, Alibaba set up Cainiao to provide logistical support to its merchant partners. In 2013 it announced it would spend 100 billion yuan to build up that network over an unspecified time frame, though it was not clear if any of that amount was included in the latest commitment.

The logistics network could also be used to supply a new generation of brick-and-mortar retail outlets that Alibaba is planning under its “new retailing” model that combines online shopping with traditional real-world stores. The company has recently rolled out an unmanned convenience store concept, and is also reportedly planning a high-tech shopping mall in its hometown of Hangzhou.