In China, Hospitals Are Calling In Dr. Robot 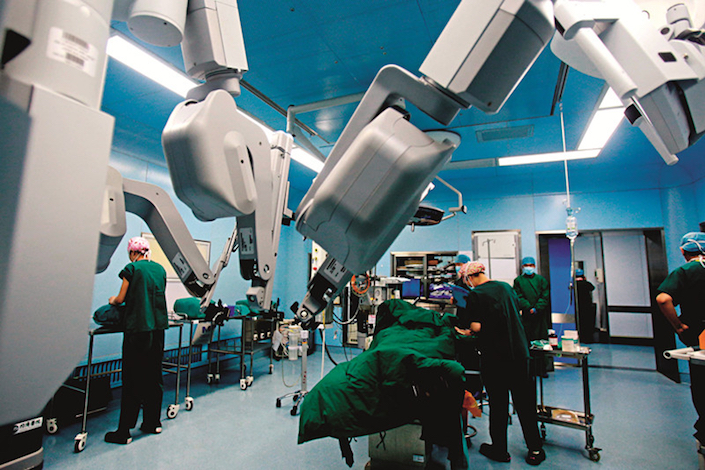 The promising artificial intelligence (AI) medical treatment industry, in which AI medical startups in China alone raised more than 18 billion yuan ($2.7 billion) by the end of August, has attracted many big names, both from home and abroad. Photo: Visual China

Over a year ago, a hospital in Hangzhou in eastern Zhejiang province welcomed a new guest: a machine with artificial intelligence (AI) technology that can diagnose solid or fluid-filled lumps in a patient’s thyroid.

So far, the robot, located in the First Affiliated Hospital of Zhejiang University, has achieved an accuracy rate of 85%, a higher mark than the doctors from the best hospitals in China, who are 70% correct when diagnosing thyroid nodules.

“The machine can’t replace human experts for now, but it is hard to tell the future,” Dr. Zhao Qiyu, from the ultrasound image department of the Zhejiang University hospital, told Caixin.

Doctors are still at the center of medical treatment, with AI playing only a supporting role. But the promising industry, in which AI medical care startups in China alone raised more than 18 billion yuan ($2.7 billion) by the end of August, has attracted many big names, both home and abroad, to explore opportunities.

In China, search engine king Baidu in 2016 rolled out the “Baidu Brain” to aid doctors when they consult with patients remotely over the internet. Alibaba-affiliated AliHealth debuted its medical image processing platform “Doctor You” in July to support doctors. And Tencent, a month later, unveiled an AI-aided product to assist doctors in screening for early-stage esophageal cancer.

AI is just starting in the medical world, and if it is to become more important than just an assistant, it must overcome issues such as access to patients’ data, which are largely locked within the hospital system in China, and it must develop a viable business model.

“Last year, hospitals were just talking about AI. Now many of them have brought it in,” said a founder of an AI startup to screen medical images, whose company expands to a new disease every two to three months.

Image recognition for diagnostics has been a hot subindustry where many AI medical firms first start, as medical images are standardized and quantified. Robots study images faster and more accurately than human beings, and they can make up for a shortage in doctors in China.

Zhejiang De Image Solutions Co. Ltd. is the developer behind the thyroid nodules machine in the Zhejiang University hospital. Company Chief Science Officer Kong Dexing said the machine, using deep learning algorithms, can achieve an accuracy rate of 60% after having studied hundreds of cases, and the rate will reach 85% with 140,000 case studies, which is faster than average young doctors.

The technology is a huge supplement to screen ultrasound images that are blurry to the human eye, and is largely applied to observe lung cancer, thyroid cancer and diabetic retinopathy, a diabetes complication that affects eyes and can lead to blindness.

AI image recognition can also relieve pressure from the country’s shortage of doctors. For example, there were more than 68 million people diagnosed with diabetic retinopathy in China, according to a 2016 post by the Fred Hollows Foundation, while the number of oculists was only 36,000, according to a seminar last year.

The proportion of people diagnosed with diabetic retinopathy accounts for only 10% of the real number of sufferers, according to the National Health and Family Planning Commission.

However, so far such image recognition developers haven’t obtained any medical care permissions from the Chinese authorities, who haven’t banned them from conducting businesses.

Almost the entire AI industry is operating without any certificates, a founder of an image recognition startup told Caixin. “Regulatory approvals also come much slower than the speed at which we innovate,” he said.

The startups in the sector have been seeking to work with hospitals and stand-alone image diagnostic centers for larger survival possibilities, and more importantly, for more data.

Data is the core of developing AI-based medical care technology. However, such treasure has been closely guarded by hospitals. Startups have been trying to obtain data.

“Hospitals are not willing to open their database. For one thing, they are responsible for protecting patients’ privacy; for another, they don’t see the point of sharing,” said Yu Zhong, founder and CEO of health care software and solutions developer Meridian Medical Network Corp.

The path to getting data is even thornier. China for now doesn’t have a national system that can track clinical records of individuals. Even if some hospitals have started to build such digital platforms, they don’t share with one another and the data are not standardized enough for machine use.

Meridian Medical managed to get the data of more than 200 hospitals by partnering with industrial associations, including the Chinese Medical Association and the Chinese Society of Clinical Oncology.

Other struggling peers, such as Zhejiang De Image Solutions Co. Ltd., which supplies the thyroid nodules machine, provide equipment and services to hospitals for free, in exchange for access to their data.

IBM has been ahead of world’s major tech companies in expanding to the AI-focused medical care sector. Its Watson for Oncology, a cancer treatment option technology, has landed in 13 countries, including China, where around 200 large and midsized hospitals have applied it to assist doctors.

The technology can provide more affordable cancer treatment solutions, as a patient can get up to 20 options for just a few thousand yuan, said Hua Songyuan, general manager of Hangzhou Cognitive Care, which first introduced IBM’s Watson to China in August 2016.

But neither IBM Watson nor da Vinci has seen encouraging financial returns.

The revenue of IBM’s cognitive solutions business, which Watson belongs to, declined 2.5% to $4.6 billion in the second quarter of the year, while gross margin decreased to 79% from 82.2% a year earlier.

Fosun Pharma reported that sales of the da Vinci system were down 52% in the first half of the year on the Chinese mainland and in Hong Kong, as the regulatory approval process was slow.

Other smaller startups in China have struggled as well. Zhejiang De Image Solutions had losses of 6.75 million yuan from 2016 to June 2017, according to its Shenzhen-listed parent company, Zhuhai Hokai Medical Instruments Co. Ltd.

AI medical care has just come out of the laboratory, and still has risks in commercialization, while they face regulatory uncertainties, according to a report by Everbright Securities.

Progress has been slow. Startups have just begun to find some steady clients. Meridian Medical, for example, turned to insurance companies that are willing to pay for Meridian’s medical data and records to improve their insurance products and pricing models.