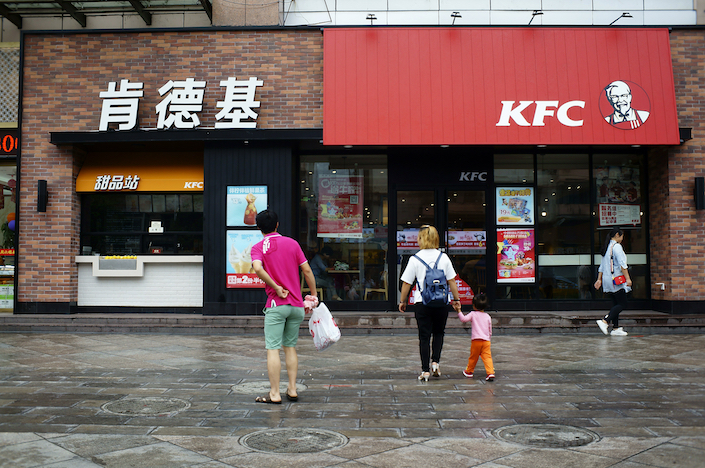 Yum China’s same-store sales, a widely watched barometer for performance of individual restaurants, rose 6% in the three months through August, a marked improvement over the previous quarter’s 3% increase. Photo: IC

Yum China, operator of the KFC and Pizza Hut fast-food chains in China, rolled out a regular dividend, nearly doubled the size of its share buyback program, and appointed a new CEO, amid signs that a nascent recovery at the company was starting to take hold.

The flurry of generally upbeat news sparked a rally for Yum China’s shares, with the stock rising nearly 3.1% in after-hours trade on Thursday in the U.S. (NYSE: YUMC). If the gains hold on Friday, they would send Yum China’s stock to an all-time high in the year since it was spun off from its former parent, KFC brand owner Yum Brands Inc.

Yum China’s flurry of announcements was included in its fiscal third-quarter report released after U.S. markets closed on Thursday. Those results saw the company’s same-store sales, a widely watched barometer tracking performance of existing individual restaurants, rise 6% for the three months through August.

That was a marked improvement over the previous quarter’s 3% same-store sales rise, and continued a trend of solid gains after a difficult period that saw same-store sales actually decline. The difficulties owed to a number of factors, including several scandals, and prompted Yum to launch a major overhaul of its KFC China stores, including the addition of high-tech touches and more upscale items to its menu.

The company had about 5,300 KFC stores in China at the middle of this year, and is planning an aggressive expansion into smaller cities that would see it triple the number over the next 10 to 20 years.

"In this quarter, our strategic initiatives on digital and delivery continued to show encouraging development, which we believe will enable our long-term growth,” said Yum China CEO Micky Pant, whose resignation from his current role was also announced in the results. “With our strong operating results in this third quarter and our commitment to return capital to shareholders, we believe we are well positioned to continue to increase shareholder value over the long run.”

Yum China said that Pant, the company’s original CEO, will transition from his current role to that of vice chairman and senior adviser to the company. COO Joey Wat will become the new CEO, in a transition set to formally take effect next March 1. Wat joined Yum China in 2014, and previously worked at the Hong Kong-based Watson chain of health and beauty product stores.

In addition to the executive changes, Yum China announced the rollout of a regular quarterly cash dividend program, declaring an initial dividend of $0.10 per share of its stock. The company’s board also approved an expansion of Yum China’s earlier share buyback program, raising the authorized amount to up to $550 million, from a previous upper limit of $300 million.